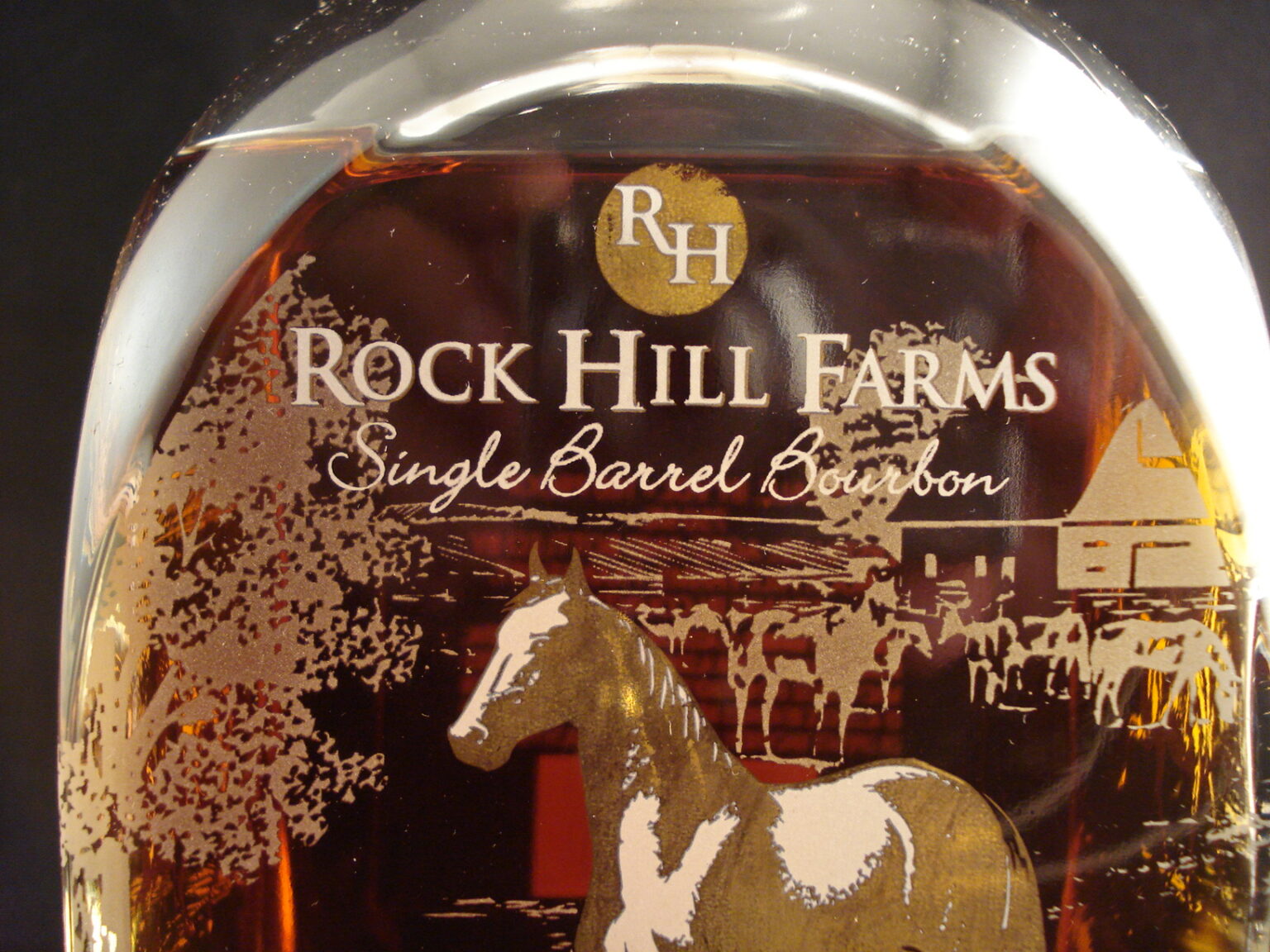 Rock Hill Farms is a very good bourbon, and worth trying. If you have an extra $60, give it a shot.

Rock Hill Farms is another of Buffalo Trace’s fine single barrel bourbons, sharing a mash bill with Blanton’s, Elmer T. Lee, Ancient Age, and Hancock’s Reserve.  It is named for a stretch of farmland along the Kentucky River.  While nearly all of Buffalo Trace’s top-shelf premiums can be a little hard to find at the moment, this is not a limited release or particularly rare bourbon.  It should be available in well-stocked liquor stores with some regularity.

Rock Hill Farms is bottled in a short square bottle with a glass stopper.  It is an extremely elegant and attractive packaging, looking as much like an expensive crystal decanter as a shelf bottling.

Poured into a Glencairn, it is a medium mahogany with some amber glints.

Corn, Spice, and sweets, including honey and baked goods.  The entire experience is wrapped in aged oak.  It’s a spicy aroma, rich and decadent.

Sweet caramel and honey on the tip of the tongue.  Ripe pears and fruits mingle on the middle of the tasting, while the back of the tongue gets a brown sugar, maple syrup, and black pepper sensation.

Medium-to-long.  The caramel and vanilla remain, and are missed with heavier oak and bitter tannins from aged wood on the tail.

Due to its presumed age, packaging, and mash bill, this bourbon is most often going to be compared to the better known Blanton’s.  However, this is a more flavorful and velvety bourbon, with sweeter bourbon flavors prevailing throughout, and what feels like just a touch more aging in the barrel (without an age statement, it’s hard to say for sure).  While we greatly enjoy Blanton’s (see our review here), Rock Hill Farms seems like a very similar bourbon done just a touch better…like a more refined big brother.

Rock Hill Farms is a stout 100 proof, and there is enough peppery kick to justify rocks or water with this drink.  Both serve to tame the kick just enough, but neither are entirely necessary for those who like the higher rye flavor profiles (Mash Bill #2 is the high rye recipe at Buffalo Trace).

The only real holdup on this bourbon is the price.  At $50, it would be a no-brainer.  At $63, it should at least give pause to many buyers.  Is it that much better than Blanton’s (around $50) to justify the extra price?  That’s subjective, and I can’t answer that for everyone else.  For me, I’d probably buy another bottle of Blanton’s and save $13 before buying another bottle of Rock Hill Farms, but that’s mainly because they’re similar, and more guests will recognize Blanton’s.  Without price as a consideration, I think this is a bigger, more complex bourbon than Blanton’s.

For me, Rock Hill Farms is a very good bourbon, and worth trying.  If you have an extra $60, give it a shot.  Your best bet may be to split a bottle first, or have a taste from a friend’s bottle before ponying up for one yourself.  Either way, you won’t be disappointed based upon flavor; it has that in spades.