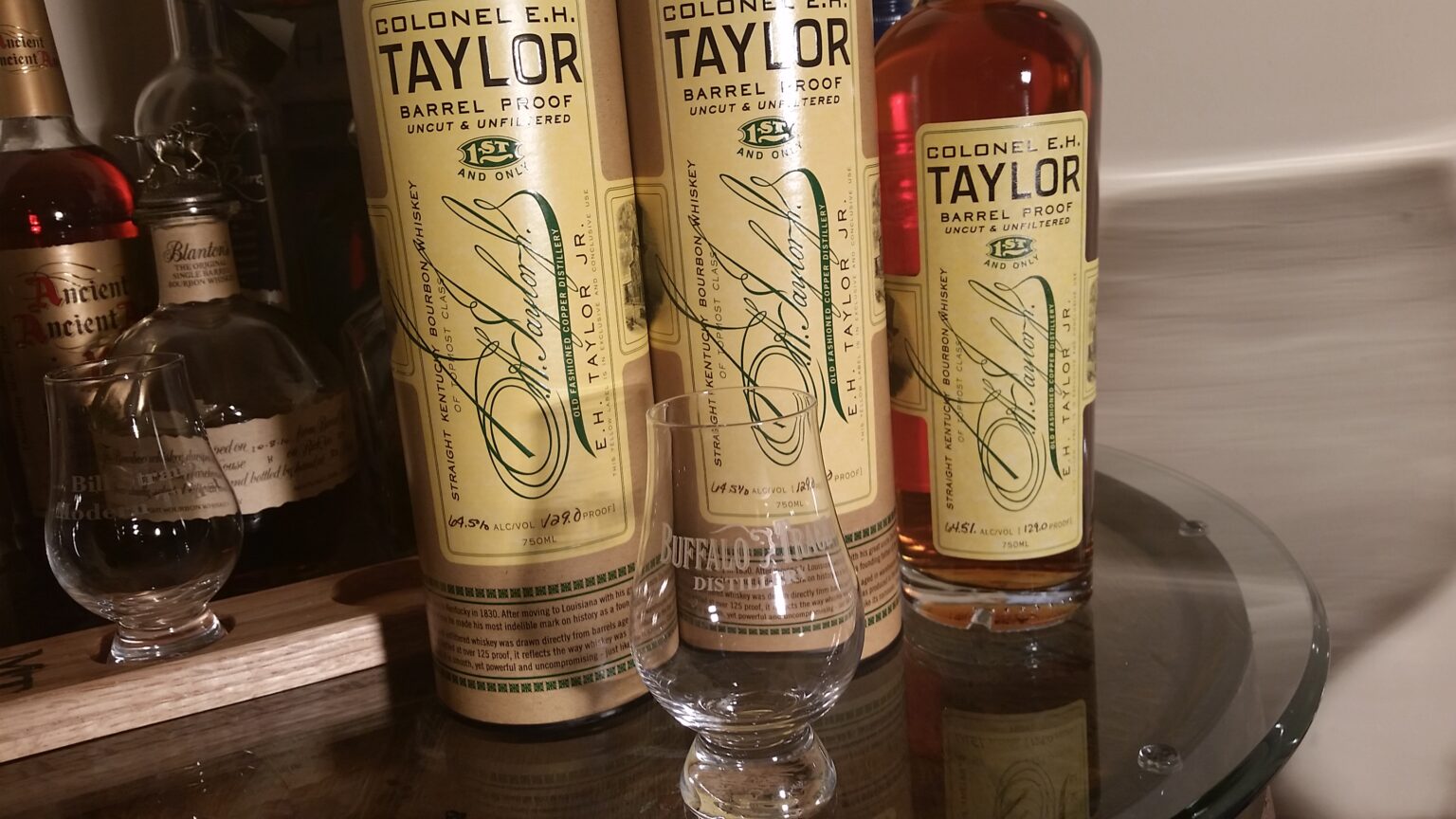 It's high proof, yet remains soft and approachable, easily sipped even without water or ice, and yet it's still very complex and very tasty. This is a tasty bourbon, and I highly recommend picking up a bottle if you can find it. 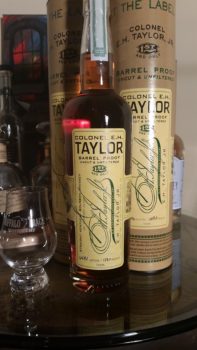 The Taylor line is produced by Buffalo Trace in Frankfort, KY, and is named for Colonel E. H. Taylor, Jr.  Taylor owned the distillery in the mid to late 1800s, and is credited with revolutionizing bourbon production.  His historic 100+ year old brick warehouse on the Buffalo Trace property pioneered climate-controlled aging, and is used today for the aging of the Taylor line. The Barrel Proof release is amongst the most popular of the lien each year, and 2014 was no different.  It checks in at 64.5% ABV, or 129 proof.  While the age is not stated on the bottle, it is estimated that the bourbon is aged at least 7 years, but likely no more than 8 or 9.  It is made using Buffalo Trace’s Mash Bill #1, meaning it uses 10% rye or less as the secondary grain, similar to George T. Stagg, Eagle Rare, Buffalo Trace, etc. 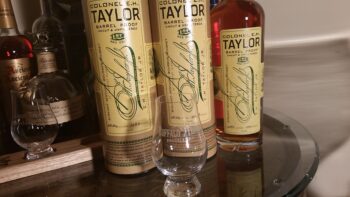 The entire E. H. Taylor line is packaged in tall bottles with cream labels bearing Colonel Taylor’s signature.  They are sold in tall tubes, reminiscent of the packaging Taylor himself used when packaging bourbon in the 19th century.  It’s extremely attractive, and looks fantastic on a bourbon shelf.

This bourbon pours a dark, deep copper, bordering on bronze.

This is a very complex aroma, starting out with strong licorice, tarragon, brown sugar and mint, with hints of green apple.  It is distinctly Buffalo Trace on the nose, with that familiar “clean” finish to the aroma that only seems to come from bottles produced at the Buffalo Trace Distillery.

Sweet caramel and butterscotch greet the tip of the tongue, but the experience doesn’t stop there.  There is plenty of honey as well.  That sweetness is followed up by a rush of citrus fruits including tangerine and orange liqueur.  the back of the tongue gets black pepper, hints of licorice, and clove.  The texture is viscous and mouth coating- extremely pleasing.

This boasts a long finish, warm, with a ton of sweet baking spices including cinnamon, clove, and a lingering honey sweetness.

Buffalo Trace makes a lot of good bourbon.  I mean a LOT of it.  Aside from the obvious Pappy that comes form the distillery, the Antique collection boasts some of the best aged and barrel-proof bourbons on the market.  However, past those limited releases, higher proof options are few and far between from Buffalo Trace.  Stagg Jr. is the only other barrel-proof bourbon produced outside the Antique collection, 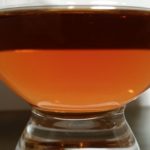 along with George T. Stagg, using a rye recipe rather than a wheated recipe.  Stagg Jr. is a mixed bag, for many drinkers, often bordering on too hot and too harsh.  This is the perfect companion to that bourbon.  It’s high proof, yet remains soft and approachable, easily sipped even without water or ice, and yet very complex and very tasty.  It isn’t particularly easy to find on shelves, but it’s far less expensive and far more prevalent than George T. Stagg.  It works fine with ice and water, but it’s not necessary.  This is a tasty bourbon, and I highly recommend picking up a bottle if you can find it.

ModernThirst.com Score: 92 out of 100 Points