It's a solid sip, and for a 12 year straight bourbon is very well priced. Still, it's good, particularly for those who are fans of Heaven Hill. This is, for all intents and purposes, a slightly hotter Elijah Craig, and that's not a bad thing. If you like Elijah Craig, you will like this...a lot. 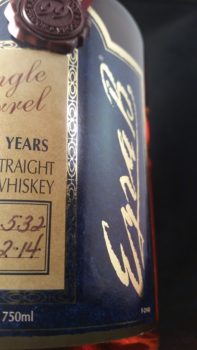 Ezra Brooks (or “Ezra B” as the single barrel is labeled), was introduced in 1960.  The current iteration is owned by Luxco out of St. Louis, MO.  Like many other payers in the Bourbon game, Luxco is a Non-Distiller Producer (NDP), which means Luxco does not actually own a distillery, and instead buys their whiskey from another source.  In this case, the whiskey is provided by Heaven Hill Distilleries.  A 12 year old Heaven Hill straight bourbon?  Sounds a lot like Elijah Craig or the Gift Shop only Evan Williams 12 year, though the 99 proof at least puts this in somewhat unique territory.  With the red label Evan Williams 12 year commanding a $130 price tag at the Evan Williams Experience gift shop, I was particularly interested in trying this bourbon, which is only 1% lower ABV and aged the same at only a quarter of the cost or less. 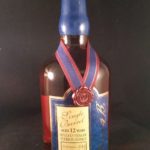 Luxco goes all out on this one.  The bottle shape is not too dissimilar from the single barrel Evan Williams line, but the label is a rich blue with gold foil print.  Royal Blue wax marks the top of the bottle, and a blue and red ribbon is wrapped around the neck, sealed with a red wax signet.  It is extremely attractive.

Medium to dark in color.

Brown sugar and caramel are the first aromas to hit the nose, and are followed up by hints of typical Heaven Hill bubblegum and vanilla.  It smells insanely rich and sweet.

Despite the sweet promise on the nose, this one is all barrel char and tannins.  There is some vanilla and burnt brown sugar at first, but it is quickly overcome with graham cracker, barrel tannins, sorghum and black licorice.

Long and lingering, there is cinnamon spice and licorice on the tail with plenty of oak and barrel flavors as well.

I’m a little on the fence on this one.  On one hand, it definitely holds true to the typical Heaven Hill flavor profile. But on the other hand, there is a clear disconnect between the nose and the taste on this bourbon.  It’s a solid sip, and for a 12 year straight bourbon is very well priced.   But I’m still unsure about the disconnect between the sweet on the nose and the barrel flavors on the taste.  Still, it’s good, particularly for those who are fans of Heaven Hill.  This is, for all intents and purposes, a slightly hotter Elijah Craig, and that’s not a bad thing. If you like Elijah Craig, you will like this…a lot.