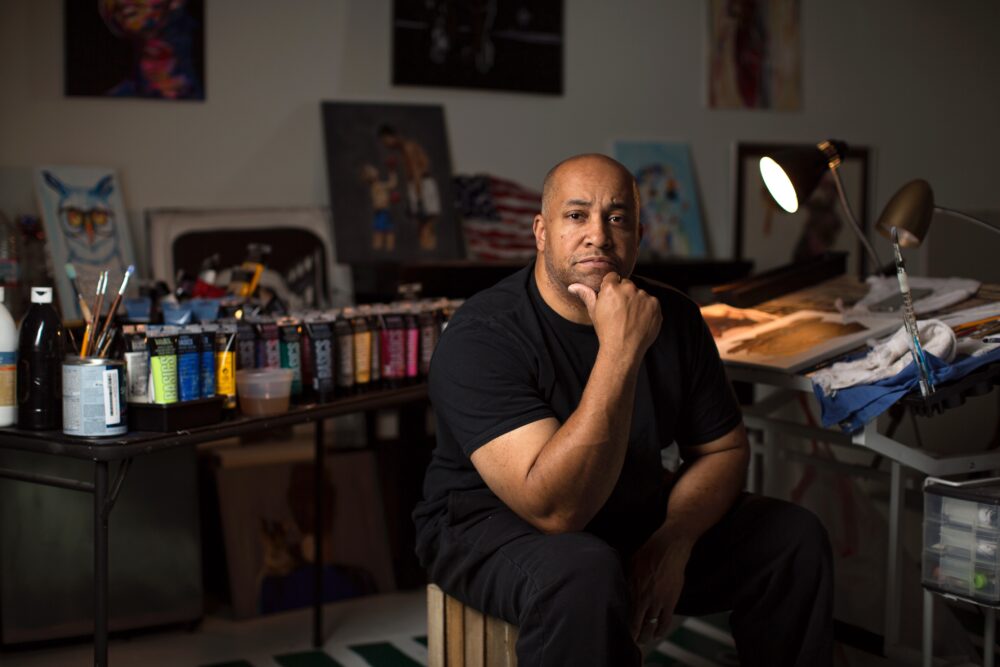 Out of all the collectible and unique bourbon bottles in existence, the Kentucky Derby Woodford Reserve bottle is a notch above the rest. That’s because the annual commemorative bottle embraces the spirit of the birthplace of bourbon. By featuring Derby-themed artwork, the label visually captures the energy, excitement, and determination that colors Kentucky during the beloved first Saturday in May. You can even taste this fervor in the bourbon itself.

I got the chance to sit down with Keith Anderson, the artist behind the painting on this year’s historic 20th-anniversary bottle, and chat about his journey to being selected for this prestigious honor two years in a row. In the most satisfying way, Anderson’s story closely mirrors the story of how bourbon is made and the story of what it takes for a horse to make it to the Kentucky Derby: it’s a road paved by tradition, hard work, and patience; it’s a historical achievement, and it’s a whole lot of fun.

The path to prestige 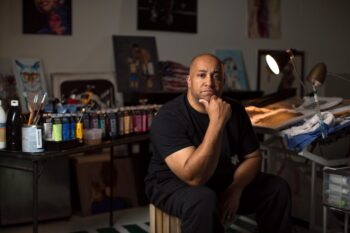 Succeeding in art, like crafting an excellent bourbon or training a racehorse, requires tenacity, passion, and unflinching trust in timing. This cocktail of traits is the secret sauce behind Keith Anderson.

Two years ago, Anderson’s life looked quite different than it does today. By day he worked in the Bourbon Street Cafe — the dining room inside the Brown-Forman headquarters — and dedicated only his free time to painting. He had a steadfast dream since childhood to get his art out in the world for others to enjoy, and though he participated in art shows around Louisville, he hadn’t yet made it to the place he had envisioned. However, Anderson held tight to his dream and trusted that his time would come.

Today, Anderson has made history. He’s the first African American artist and first Brown-Forman employee to be selected as the Woodford Reserve Derby bottle artist two years in a row. When I ask him about this, he smiles at the fact that he has a recognizable name around Louisville and beyond— a name that is “Google-able.” The honorary role propelled him from moonlighter to lime-lighter. Now he spends his Derby season signing bottles, traveling around the country and enjoying the life he once dreamed of.

Despite his success, he’s incredibly modest and takes his well-earned fame in stride. That’s the portrait of Anderson as an artist: a talented, humble Louisvillian who is both gracious and tenacious. At the end of the day, he celebrates the fact that his art is out in the world for others to enjoy.

However, his fame is nothing to scoff at. Anderson has fans across the globe. Just recently a gentleman in China let Anderson know how much he adores the artwork.

How did he get his art on the bottle? Through years of believing in his dream, working hard and trusting that his time would come.

“You’ve got to stick with it,” Anderson said. “For me, it was in there. It’s embedded [in me]. I’m an artist. I’ve worked other jobs, but I’ve always painted. You have to be patient. Your time will come.”

And when his window of opportunity opened, Anderson seized the day.

Anderson’s ultimate dream of being an artist, and what kept him working for Brown-Forman in some capacity for 13 years, hinged on being selected for the highly coveted role as theartist of the Woodford Reserve Kentucky Derby commemorative bottle.

“I remember working parties and seeing those Derby bottles out and thinking, ‘Man, one day. Just one day,’” Anderson said.

He understood the value of what this honor could do for his artwork. He began working for Brown-Forman in hopes that the opportunity to do the Derby bottle artwork would present itself. And in 2017, it finally did.

While working one day, Anderson got the opportunity to chat with Mark Bacon, Senior Vice President of Brown-Forman. Anderson courageously approached him about his artwork and said something along the lines of, “I’m talented, and I know one day that will be my artwork on this bottle.”

Bacon asked Anderson to send him some of his artwork, and as Anderson put it, “The rest is history!”

“In different ways, Bacon told me, ‘Your world is going to change.’ And it did,” said Anderson.

The opportunities multiplied after Anderson was selected to do the bottle again this year — which happens to be the 20th anniversary of the commemorative bottle.

“It’s just a good feeling — the little things. It’s just a wild moment. I still sit back and think about how crazy this is.”

When I asked what this feels like, Anderson repeated the words “thankful,” “grateful” and “blessed.”

“I was doing shows, but trying to get hired is another level. And doing the bottle took it to that next level,” Anderson said, thanking Brown-Forman for the opportunity. He also expressed gratitude for his family who inspired him to be a better artist.

A penchant for painting runs in the Anderson family. He grew up with brothers who functioned as built-in art teachers. They showed him different drawing and painting techniques. Even to this day, Anderson and one of his brothers continue to inspire each other to continue painting.

This year’s artwork captures not only the essence of “the greatest two minutes in sports,” which is action, excitement, and glory. The inspiration behind this year’s bottle came from Anderson’s time spent at the track.

“There’s so much going on around Derby time — color, excitement. As an artist, my mind is just going,” Anderson said. “I try to have fun with it and I try to use all the colors that I can. Because when you think about Derby, that’s what you think about: the colors.”

When he created the painting for the 2018 bottle, he wanted it to be so good that the subsequent artist would have big shoes to fill.

“I thought, ‘Whoever comes after me…good luck!’” Anderson said.

Little did he know, he’d be the one challenged to rise to the occasion again.

“And I’m just thankful because this is what I wanted. More people get to see my work. Business is flowing. It’s all positive,” Anderson said. “Looking at the big picture, I just sit back and feel how blessed I am. I know people that are in my situation and now they see me on TV, it’s all positive and I’m thankful for it. Working hard and doing art. You have to sell yourself. And that’s what I did.”

In all its beauty, Anderson’s painting on this year’s label is the quintessential visual representation of both bourbon and the Derby. When you take a sip of whiskey or watch those horses lap around a world-renowned track or look at a colorful painting, it’s hard not to be in awe of the hard work and dedication that goes into that small bottle, those two minutes and that small canvas. It makes you want to slow down and enjoy the mastery in the moment.

You can still purchase the commemorative bottle for a suggested retail price of $43.99 now and enjoy it even though Derby week is over.  Also, catch a glimpse of Keith’s artwork, along with all of the original artwork that has been featured on the past Derby bottle labels, at the Frazier Museum’s year-long exhibit entitled “Woodford Reserve & the Kentucky Derby: Two Decades of Artistry, Bourbon & Horse Racing.” The exhibit opened Mar. 20 in Louisville, Kentucky.