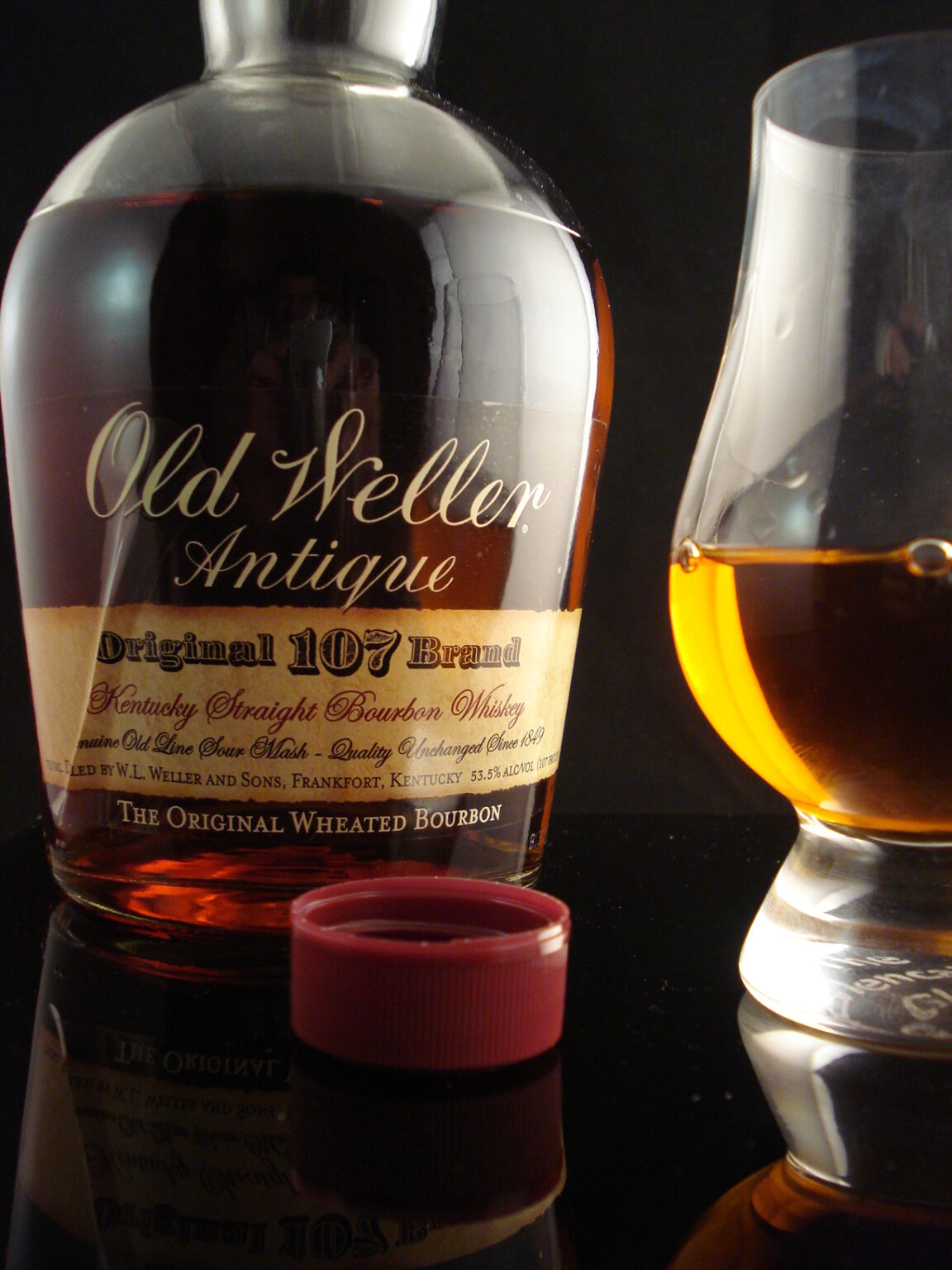 Old Weller Antique is definitely a quintessential wheated bourbon, maintaining the Buffalo Trace reputation for tasty quality. It would be better at 7-10 years, but it's still quite good. Beware of rising costs. 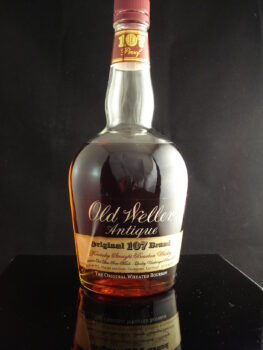 Old Weller Antique is a wheated bourbon distilled in Frankfort, KY.   And any mention of distilling in Frankfort, KY should immediately bring two words to the mind of a bourbon enthusiast:  Buffalo Trace.  Yes, this bourbon is distilled at the massive Buffalo Trace facility in Frankfort.  The modern brand was actually developed at the famed Stitzel-Weller distillery in the Shively neighborhood of Louisville.  Any mention of a wheated bourbon from the Stitzel-Weller distillery should bring to mind the Van Winkle label.  Yes, the Weller line shares a good deal of DNA with the famed Pappy Van Winkle bourbons.   The Van Winkle bourbons are also produced out of the Buffalo Trace distillery.  Same wheated recipe, same distillery.

Old Weller is the highest proof of the regular W. L. Weller lineup, excluding the annual limited release of the William Laure Weller with the Sazerac Antique Collection.  Old Weller is a 107 proof, 7 year old wheated bourbon.  I purchased this at a local retailer for $23.99.  Like many of the Stitzel-Weller offspring, this bourbon is “wheated,” meaning the rye found in most typical mash bills has been replaced by wheat.

With the relative rarity of the Van Winkle line of bourbons, many consumers have turned to the Weller line to sample an aged wheated bourbon, and while the standard 90 proof W.L. Weller is still easy to find, the Old Weller and particularly the 12 year old Weller have become far more difficult to locate.  While the ultimate product should not be used interchangeably with Pappy, many feel the bones are there to at least get a hint as to what Weller’s more expensive and refined cousins are offering.

The Weller line is released in short, squat broad-shouldered bottles with screw tops.  The screw-top method is usually not the mark of a high-end bourbon (yes, Knob Creek has challenged that perception, but sources tell me they are abandoning the effort in favor of cork once again).  The label is screen printed on a clear plastic decal rather than directly onto the bottle itself.

On my particular bottle, the label was wrinkled and poorly applied.  The disappointing packaging is not appealing for this bourbon, and it will draw attention to itself on your bourbon shelf only for the wrong reasons.

This whiskey is a dark auburn color with a touch of cloudiness, and a deep, rich amber profile.  It looks extremely appealing.

This first whiff reveals a stringent alcohol quality which seems to overpower the weaker hints of sweet fruits and vanilla.  A little more diligence on the nose turns up banana and oak.

The alcohol content is immediately prevalent from the first taste, creating an acrid note on the tip of the tongue that puckers the mouth. At the middle of the tongue, there are definite notes of caramel and vanilla, but the acrid alcohol bite carries through.  At the back of the tongue, some oak and vanilla hints begin to shine, but they are still nearly overpowered by the same acrid alcohol flavor.   Throughout the process, there is a definite fullness and smoothness to the consistency of this bourbon that is extremely pleasing.  It seems to coat the tongue and the inside of the mouth with a velvety texture from the wheat.

The second tasting was done with the addition of distilled water, and it certainly served to quiet down the acrid bite, though it did not completely eradicate it.  Over ice, the velvety texture unfortunately disappeared.  That leaves me with the impression that this bourbon should be sipped with a few drops of distilled water for optimal enjoyment rather than neat (that acrid hint is not a great attribute) or with ice. 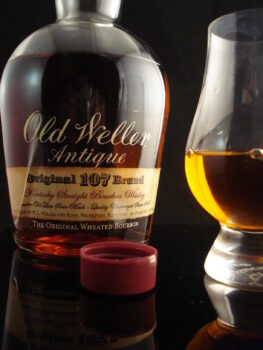 Those looking for a Pappy van Winkle profile really ought not focus on the Old Weller Antique.  It’s wheated, which is at least in the ballpark of Pappy, but the flavors are not nearly as refined and pleasing with the Old Weller Antique as in the Pappy line.  In fact, the Old Weller is a bit of a one-trick pony.  The most pleasing sensation is the texture, but the biggest drawback is the harshness of the alcohol bite on the tip of the tongue.  To calm the harshness, this bourbon needs ice or water, but adding ice or water dilutes the velvety texture, creating a bit of a catch-22.  That leaves this as a bourbon that feels very incomplete.  Granted, for $25, it’s important to judge this based on what it is (an inexpensive high proof wheated bourbon), not what it isn’t (Pappy).

That’s not to say there is no value to this.  For under $25, there aren’t a lot of high proof wheaters available.  And this is definitely a quintessential wheated bourbon, maintaining the Buffalo Trace reputation for tasty quality.  It would be better at 7-10 years, but it’s still quite good.  So this remains a very popular everyday sipper for a great many bourbon drinkers.