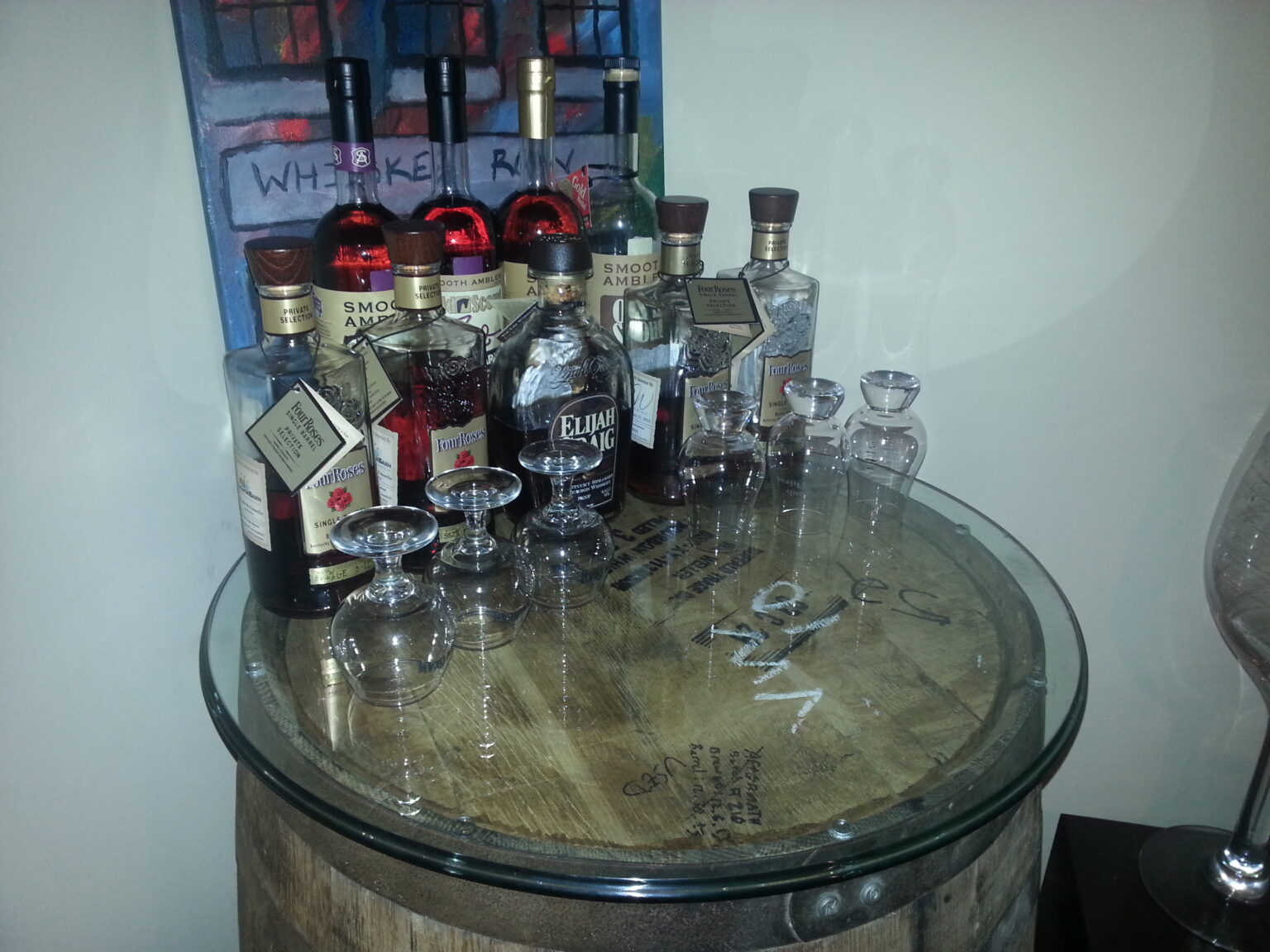 Last week, Co-Editor of Modern Thirst, Matt, came across an opportunity to purchase some used barrels that had once held Old Rip Van Winkle 10 Year Bourbon for a very low cost. Matt has been toying with the idea of building a bar out of bourbon barrels himself, so he jumped on the chance and bought two.

I was jealous, naturally, and asked him to pick up a 3rd for me.  I didn’t even know what I wanted to do with it, but every serious whiskey writer and blogger needs a bourbon barrel, right?

After some serious deliberation in the Modern Thirst Compound (aka: drinking in my basement bar), I figured I would take the easy route and use it as a bar table to display some glassware and bottles. 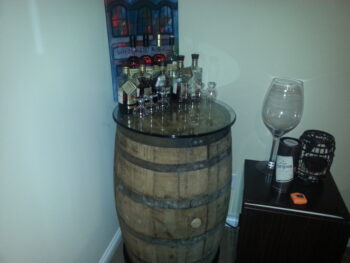 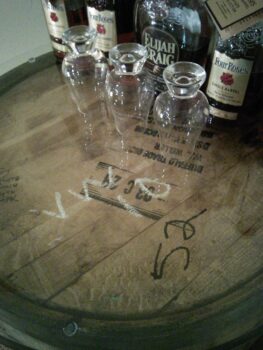 If, per chance, you are looking to do something similar, here’s all it takes:

1.)    Get a barrel. There are a lot of different places that sell them and deliver them, and the prices range from under $100 to a couple hundred bucks. Matt got ours from a brewer in Cincinnati who had used them to barrel age some beer. Now, mind you, at some point, you may need to finish and treat your barrel. When barrels dry up, the wood shrinks and the metal hoops can slip off, causing the barrel to fall apart over time. I haven’t done that yet, but there are numerous resources on the web with instructions.

My barrel denotes that it was filled on March 28th, 2003 by Buffalo Trace, and was earmarked for W.L. Weller bourbon.  The Chalk “VW 10” marking shows it was at some point thereafter selected for the Old Rip Van Winkle 10 Year product. 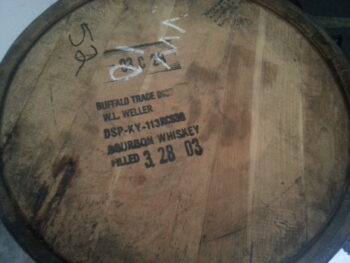 2.)    Decide on a base. You could build one, or forgo the base altogether, but this base I purchased on Amazon.com has casters, which allow me to move the table easily, and perhaps more importantly, they raise the table up off the floor, protecting my carpet and making the table a few inches higher.

The base I chose is intended for moving large potted plants, this one specifically stating it is great for whiskey barrel planters.  The base of the barrel is roughly 22 inches in diameter, with this base being 24 inches.  It fits perfectly, and isn’t permanent.  The barrel simply sits on the base, which can hold up to 500 pounds.

3.)    Pick a table top. You could just use the barrel top, but I wanted to protect it and the chalk marking that denoted it was chosen for Van Winkle, as well as display that information. So I bought a round glass tabletop from Pier1. Again, the top rim of this barrel is roughly 22 inches in diameter.  So you could choose a large tabletop, or a smaller one that is nearly the same size as the barrel.  A larger one might allow you to sit around it (don’t lean on it!) while a smaller one allows you to move it back into a corner.  I chose a 24″ top, which is roughly the same diameter as the fattest part of the barrel.

But I have seen tops of around 30″ used as well if you want a larger table area.  So this top overhangs the rim of the barrel by only an inch or two, which allows me to move the whole table into the corner without taking up too much space. 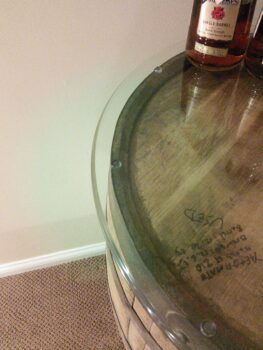 If you do choose a table top, you’ll want to make sure you put something between the glass and the barrel in order to protect the glass and also allow it to level itself. I found self-adhesive silicone furniture bumpers at Wal-Mart for under $2 and placed them on the rim of the barrel.

And that’s it!  Move the barrel into position on the base, stick the bumpers on the barrel rim, and place the glass tabletop on top of the bumpers.  Voila!  Bourbon Barrel Table!  The only really difficult part was getting the barrel to my basement.  Definitely get help moving your barrel up and down stairs.  Even empty, bourbon barrels are still made of solid white oak and metal hoops, and can weigh between 100 and 150 pounds.