If you’re not a Brandy fan, or a resident of Louisville, it’s likely you haven’t visited the Copper & Kings distillery in the Butchertown neighborhood just east of downtown.  You should visit it next time you’re in town.  ModernThirst and a host of other writers, bloggers, and podcasters toured the facility last week as part of the Roguebuss.  (The first rule about #RogueBuss is that you don’t talk about #RogueBuss.  So follow @RogueBuss on Twitter for more info).

As a primarily brandy-producing facility, it’s at once both similar to and very different from a bourbon distillery.  Aside from the product itself, the aging methods of brandy are slightly different.  Rather than wild temperature swings dictated by unpredictable Kentucky weather, brandy needs a much more consistent, stable temperature.  So the basement of Copper & Kings is dedicated to aging barrels in what basically looks like a subterranean rick house.  Thinking about that, one might assume the liquid in the barrels sits dormant, subject to only a slow, chemical aging process.  Copper & Kings has other ideas. 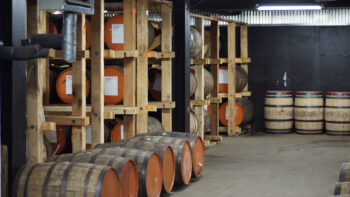 We entered the basement to a blaring sound system that was blasting AC DC at high volume.  The theory is that the wave lengths from the bass lines enters the barrels and hits the denser, heavier ethanol molecules, separating them from water and other particles, and moves them about inside the wood.  So barrels at Copper & Kings are treated to classic rock on a daily basis- the playlist depending on the day (David Bowie on the day he died, for instance) to the whims of the  guys in charge that particular day.

Sounds a little hipster, right?  Keep reading.  There was monarch butterfly habitat just inside the entrance to the main courtyard, which is flanked by three massive shipping containers which have been repurposed to serve as the gift shop.  Let’s not forget the solar panels atop of the building as well.  They encourage workers and visitors to bike to the facility, and have large bicycle racks out front.

This is the most hipster place I’ve ever seen. -Ginny Tonic

Ginny Tonic, of CharlieTonic.com and Bourbonbanter.com  called it “the most hipster place I’ve ever seen.”

“Hipster” or “environmentally aware,” it doesn’t really matter.  It works. It fits the neighborhood.  It fits their message.  It works.

Their brandy is pretty darn tasty.  They make a mean absinthe.  And we were lucky to taste the new Craftwerk line of beer-barrel aged brandy that had not yet hit the market…wow. They offer four different iterations aged in four different barrels.

Of all the bourbons I tasted throughout the Bourbon Classic weekend, and all the cocktails I tried, the Craftwerk aged in Against the Grain Smoked Scottish Ale barrels is the one thing that I thought enough of to buy, and the one thing my mouth his most watering to have again. It’s simply delicious. The Three Floyds aged product was a very close second, though none of the four was anything but great.   Production was extremely limited, so if you get a chance to buy any of the four, buy them.  They retail for $49.99.