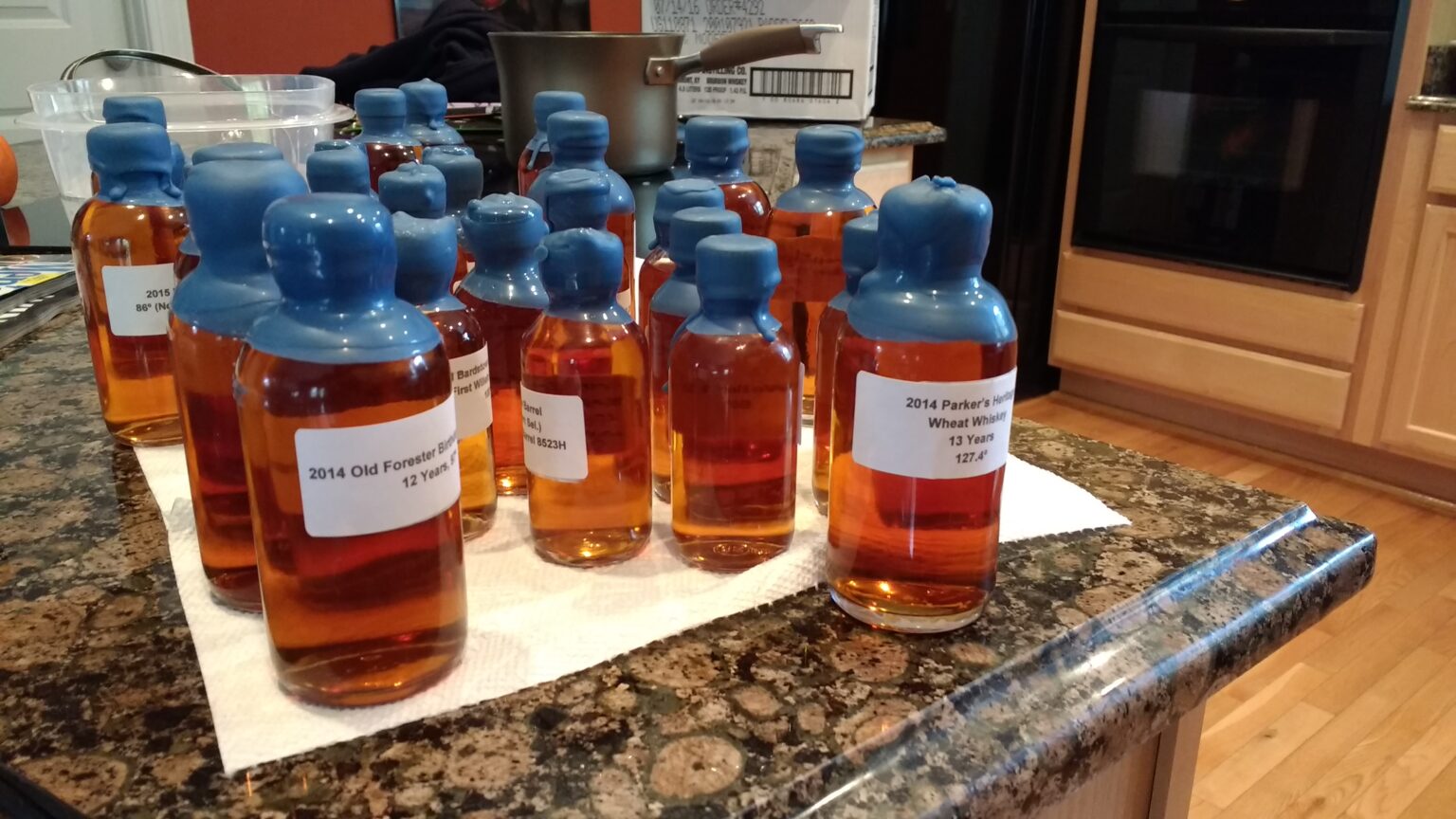 It’s no secret.  Sometime we whiskey lovers take our passion to the point of obsession.  It’s okay.  ModernThirst is here to help.  No, we’re not going to help you end your obsession, we’re going to help you channel it into new and creative ways to express it.

Over the past couple of years, we’ve begun building up a small library of samples from rare or interesting bottles we’ve owned.  We use 2 or 4 oz Boston Round bottles, as described in this post.  The purpose of this is not to sell, trade, or distribute the samples.  It’s to create a time capsule, so-to-speak, of the bourbons we find and love today, knowing that flavors and production methods change over time.  In a few years, we hope to be able to compare today’s whiskeys to tomorrow’s bottlings.  It also allows a bit of sentimentality.  I saved a sample of Old Forester Birthday Bourbon from each of the two years my daughters were born, and I’ll  share it with them when they turn 21.

But I’ve always worried a bit as to whether or not they are properly stored for long-term safekeeping.  Despite being pretty good vessels to store whiskey, there is a measure of evaporation with Boston Round bottles.  Not too much in the humidity that is Kentucky, but enough to worry about if these whiskeys are stored for 5+ years.  Enter the wax seal.  Now, this isn’t my idea.  I’ve seen it on the internet in various places over the years, included Red, White, & Bourbon.  And, as a mildly obsessed whiskey lover, I thought…why not?  This method can obviously be used by whiskey sample collectors, but it would work with any sort of bottling- home brew, wine, extracts, sauces, oils, etc.  (But this is a whiskey site.  So go get some whiskey and put it in little bottles.)

First things first- get the wax.  Amazon makes that easy.  I chose blue because, well, I don’t know why I chose it.  But there are a ton of different colors to choose from.

Step 2 is to open some bourbon and have a sip.

After that, you need to heat the wax.  Looking through YouTube and other sites, most recommend using a crock pot to heat the wax, but I’m relatively sure my wife would break a bottle over my head if I used her crock pot for sealing wax bottles (she “tolerates” my obsession to a point).  Wax melts at around 110ºF, according to the documentation, but needs to be kept around that temperature and not allowed to get too much higher, or it becomes too watery and won’t coat the bottle with a thick enough layer of wax to seal it.  That rules out putting the wax directly in a pot.  Another method widely recommended is placing the wax in an empty can inside a pot of boiling water.  That heats it slowly and keeps it from getting too hot.  Sounded like a plan to me. 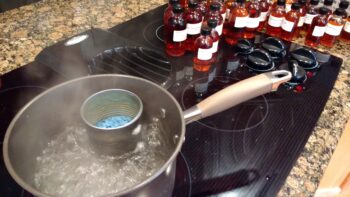 On the stove it went.  A key at this point is patience.  It takes a while for the wax to completely melt.  I used a pencil to stir it in the can until it was completely melted.  And here’s the next key step I learned: remove the can from the pot and place it away from the water.  Why?  Well the steam coming out of the pan is really hot.  And to add to the potential crippling burns, it will get the labels on the bottles wet and make them unreadable.  Trust me, the wax will take a while to cool down.

At that point, it’s simply time to dip the bottles in the wax so that the top of the neck and the entire cap is covered.  Hold it above the can and rotate it in your hands with the cap facing down, allowing excess wax to drip back into the can, and you’re almost done.  If you want that dripping wax look like a certain trademarked dripping-wax bourbon, don’t rotate the bottle.  Just dip and sit upright immediately.  I tried both ways and I prefer the cleaner look.

I read that dipping the wax in cold water while it’s still soft will help it get a “glossier” finish.  I tried that, but I really didn’t see much difference at all, so I’ll let you make your own decisions on that.

I used about 1/3 of the bag and dipped about 30 bottles with a bit of wax to spare (you can re-use it if you save the can).  I have more to go, but my time was limited and the can only held so many wax beads.  In the end, I was pretty pleased with the results.  Store your bottles upright in a dark, cool place out of direct sunlight.