If you’ve been around a while, you might remember commercials for a hangover prevention supplement a few years ago for a product called “Chaser.” They were readily found at drug stores, gas stations, and any place else you might expect. 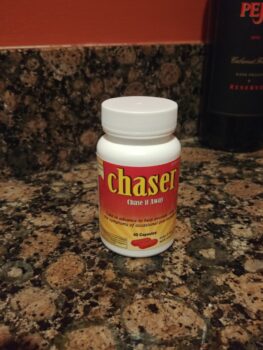 Some years ago they disappeared. But if you were a fan, don’t fret, they’re back. And when we were contacted just before the Bourbon Classic to see if we’d like to product test Chaser, we thought “Why not?” The producers sent us a bottle at no cost and asked for our feedback. Here it is.

The instructions said to take two capsule with our first drink. So Friday night of the Bourbon Classic, with Uber rides lined up, we did just that. We took two pills with water as we started into our weekend of whiskey. The instructions then say to take two more capsules 4-6 drinks later, or every 2-3 hours. We did that.

The next morning, I have to say it was difficult to know if it worked. I’m not a ridiculously heavy drinker, and though I try not to overindulge, I can hold my bourbon pretty well. I was definitely fighting a headache for a good part of the morning, and I did sleep poorly. Matt and Wes seemed to fare much better, but none of use really could say if Chaser worked or not. I let the matter rest.

Fast forward two weeks and I was attending an annual wine party event. While I say I do a pretty good job with beer and whiskey, red wine hurts me. I love it, but I get headaches, night sweats, and really drag the next morning if I drink a little too much. Perfect chance to try it again. I followed the instructions again and my wife and I attended the party. We indulged. I indulged.

The next morning I awoke, and hadn’t woken up in the middle of the night and didn’t feel bad at all.

So does Chaser work? I don’t know. I certainly had one good experience with it out of two. But it’s impossible for me to know if Chaser was the reason I felt good after a night of red wine or bad after a night of bourbon. So I leave it to you. It’s available, you can buy it at the brand’s website, and you can try it yourself if you’re so inclined.