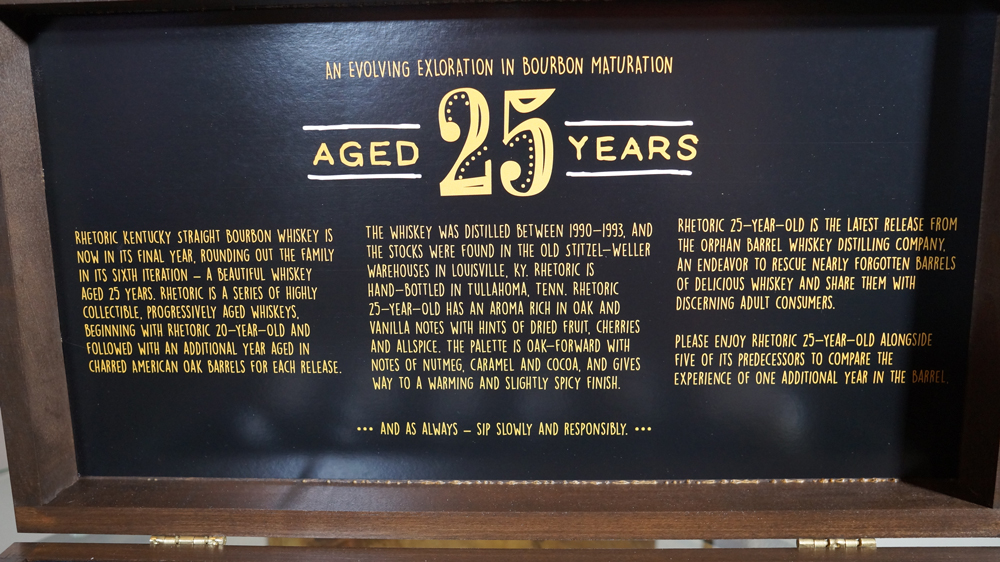 Rhetoric 25-Year-Old is the latest release from the Orphan Barrel Whiskey Distilling Company –a beautiful Kentucky straight bourbon whiskey aged for 25 years. Aged five years longer than the first release, Rhetoric 20-Year-Old, it is slightly more mature and carries a higher proof. The Rhetoric series has been progressively aged and re-released annually at a year older, allowing whiskey aficionados to collect the series and compare the whiskeys side-by-side…

The whiskey was distilled (between 1990-1993) at the Bernheim Distillery historically located at 17th and Breckenridge in Louisville, Ky., while owned and operated by United Distillers. The whiskey is hand-bottled in Tullahoma, Tenn…

Okay, so there’s the company line. Here’s the bottom line: the packaging on this sample (to get this out of the way, we received this as a media sample, but the thoughts and opinions herein are our own) is unreal. Amazing presentation with samples of each Rhetoric released to date.

The rest of the bottom line is this-

This review will have absolutely zero impact on anyone considering buying this bottle. We know the line. Orphan Barrels are too old, too oaky, and not worth the hype. Anyone reading this has no doubt already decided whether or not they like the Rhetoric lineup, or already has collected the other releases and want to buy a bottle to complete the set, or know exactly what the secondary value would be. I get that. But I also know there is a small but curious segment who just want to know how it tastes. This is for those few. 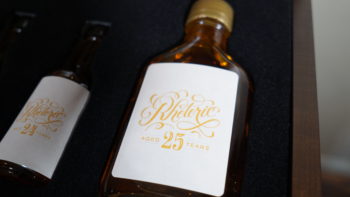 HEAVY oak, with a slight splash of vanilla and licorice on the periphery, falling into a tiny hint of custard at the tail end.

Again, Oak is the dominant flavor here right on the front of the palate. But this surprisingly develops some great secondary flavors on the mid palate and later that include  unsweetened cocoa powder, tobacco, and even some sour green apple notes.

Only medium in length, the finish is mostly sweet, with slight barrel tannins on the inside of the mouth. The oak develops slowly on the finish, rising to a pleasing sensation before developing into a yeasty cardboard note.

I expected an oak bomb, and got it…sort of. Diageo did a good job taming the oak into something more manageable on this expression to the point where it’s really a nice sip after the initial front-palate burst of barrel notes. The front of the palate and end of the finish aren’t the best, but it seems like Diageo figured out how to handle this whiskey. It’s unfortunate it took them til the last expression to do so.

The front of the palate and end of the finish aren't the best, but it seems like Diageo figured out how to handle this whiskey. It's unfortunate it took them til the last expression to do so.