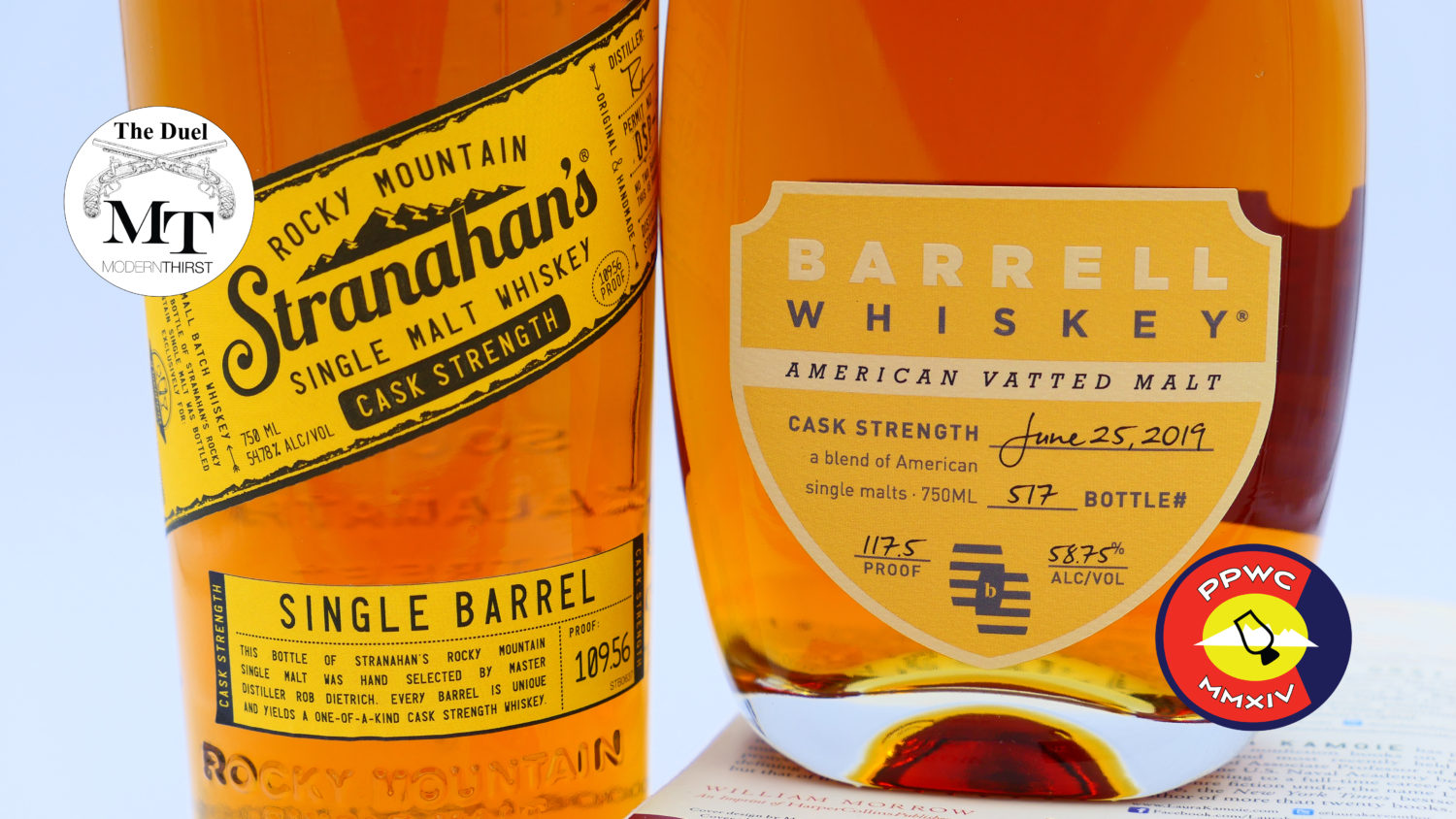 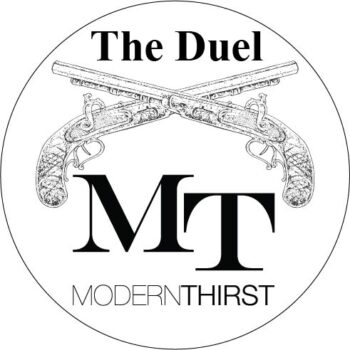 Today we are beginning a new feature on ModernThirst, hopefully one that will occur at least monthly moving forward.  We plan to pit two (or sometimes even more) whiskies against each other in what we are labeling The Duel. Sometimes the pairing will consist of a blind tasting of two whiskies from the nearly 150 blind samples I have set aside. As part of this new effort I’m going to bring in the thoughts, reviewing notes, and scoring inputs of some members of the Colorado Proper Pour Whisk(e)y Club to give multiple views on the whiskies challenging each other. Our club has been meeting for over five years now and have rated over 300 whiskies on a 100-point scale very similar to that used on the ModernThirst site.  In our monthly meetings we will typically have from four to ten different members rate a lineup of whiskies. The challengers in The Duel this month were the first two whiskies tasted (while our senses were not skewed by any other whiskies in the lineup) during our October monthly meeting: Stranahan’s Single Barrel Cask Strength and Barrell Whiskey American Vatted Malt. Both are high proof American malts. 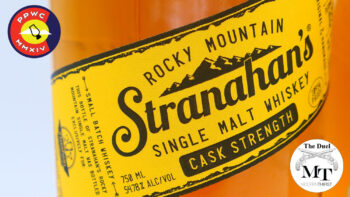 These two bottles were chosen because the American Single Malt (and in this case American Vatted Malt) category is growing in availability and interest. Our club has now rated 25 different American Single Malts, so this category is not new to us.  Also, both of these whiskies are higher proof – coming in at 109.5 and 117.5 respectively for the Stranahan’s and Barrell Whiskey – providing a good comparative baseline.  We, as a club, typically like what Stranahan’s produces and have also really enjoyed each of the Barrell Craft Spirits bottlings.  Today, we have before us a single barrel (of at least 2 years minimum in age) from a reputable distillery facing off against a company that is known for their masterful blending – and in this case they have blended whiskies from at least six different states with ages ranging from 1.5 – 8 years old.  Stranahan’s comes from Colorado and is a single malt aged in new charred American Oak.  The Barrell Whiskey has multiple collaborators (some remaining anonymous) including Balcones Distillery in TX, Hamilton Distillers Del Bac in AZ, Midwest Grains Products (MGP) in IN, Harvest Distillery in NY, Santa Fe Distillery in NM, and Kings County Distillery in NY.  Are the sum of the parts in the Barrell Whiskey greater than the single distillery effort from Stranahan’s?  On to the stats and then our thoughts. 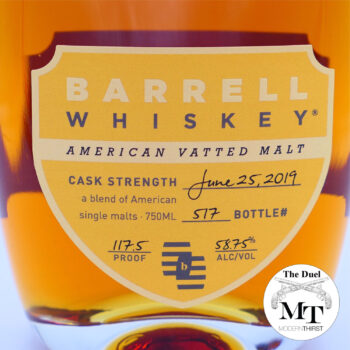 Notes for Jeremy and I, as usual are annotated below by the identifiers (JR) or (WJ). Other Proper Pour Whisk(e)y Club members will be listed by their initials – for this tasting Jeremy and I were joined by two other club members – (JF) and (PM).

As always – the notes you see below were written and the bottle scored prior to any discussion by the group of what we nosed, tasted, or felt overall, about the drams in consideration.  The bottlings are identified as [Stranahan’s] and [Barrell Whiskey] in the ratings areas below.  I’ll provide the notes and winner in each category – nose, taste, finish, balance – and the overall winner and breakout of scores in the synopsis.

[Stranahan’s] not too hot, good example of Stranahan’s malt (WJ); everything matches, it gets better with even more sips (JR); well-balanced, even across the board – nose, taste, finish (JF); nice, but a bit harsh – alcohol note peeking through (PM)

[Barrell Whiskey] a touch of water helps – my least favorite Barrell Craft Spirits product so far (WJ); it all matches but it is not all great, more interesting than good (JR); disappointing flavor to nose – fell flat (JF); nice overall balance (PM)

It is always interesting to compare the tasting notes from a group effort and to see how a whiskey interacts with us each individually and then to step back and look at the collective results. We all bring different experiences to 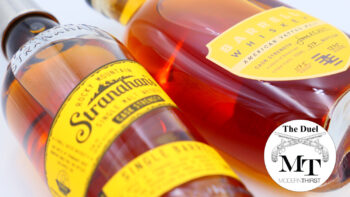 the tasting table, different palates, and varied overall whiskey tasting histories. In our first duel there was a clear winner for the group overall with three of four tasters giving the outright victory to STRANAHAN’S SINGLE BARREL CASK STRENGTH (DAVIDSONS STORE PICK).  In the 16 rating areas for the 4 tasters – Stranahan’s came out on top in nine areas, with Barrell taking five, and two areas resulting in ties for the individual tasters.  The BARRELL WHISKEY AMERICAN VATTED MALT (JUNE 25, 2019) was the overall favorite of one reviewer.  Barrell Whiskey had the higher average score on the NOSE, but Stranahan’s took the honors on TASTE, FINISH, and BALANCE.  The biggest difference in ratings for the two whiskies was on TASTE with the Stranahan’s scoring an average of 1.7 points higher on the 25 point scale [22.5 to 20.8].

An interesting dram, but the multiple parts did not surpass the individual Colorado effort. For those in the group that have tasted other Barrell Craft Spirits releases this was not the favorite of their lineup.  Individual ratings in order from high to low:  [88.5, 87.0, 82.0, and 82.0].

Hopefully you enjoyed this new Duel format that included some other members of the Proper Pour Whisk(e)y Club – let us know what you think in the comments.  We are already planning out our next challenge for November.  If there is something in particular that you’d like to see in The Duel send me an e-mail at wes@modernthirst.com.