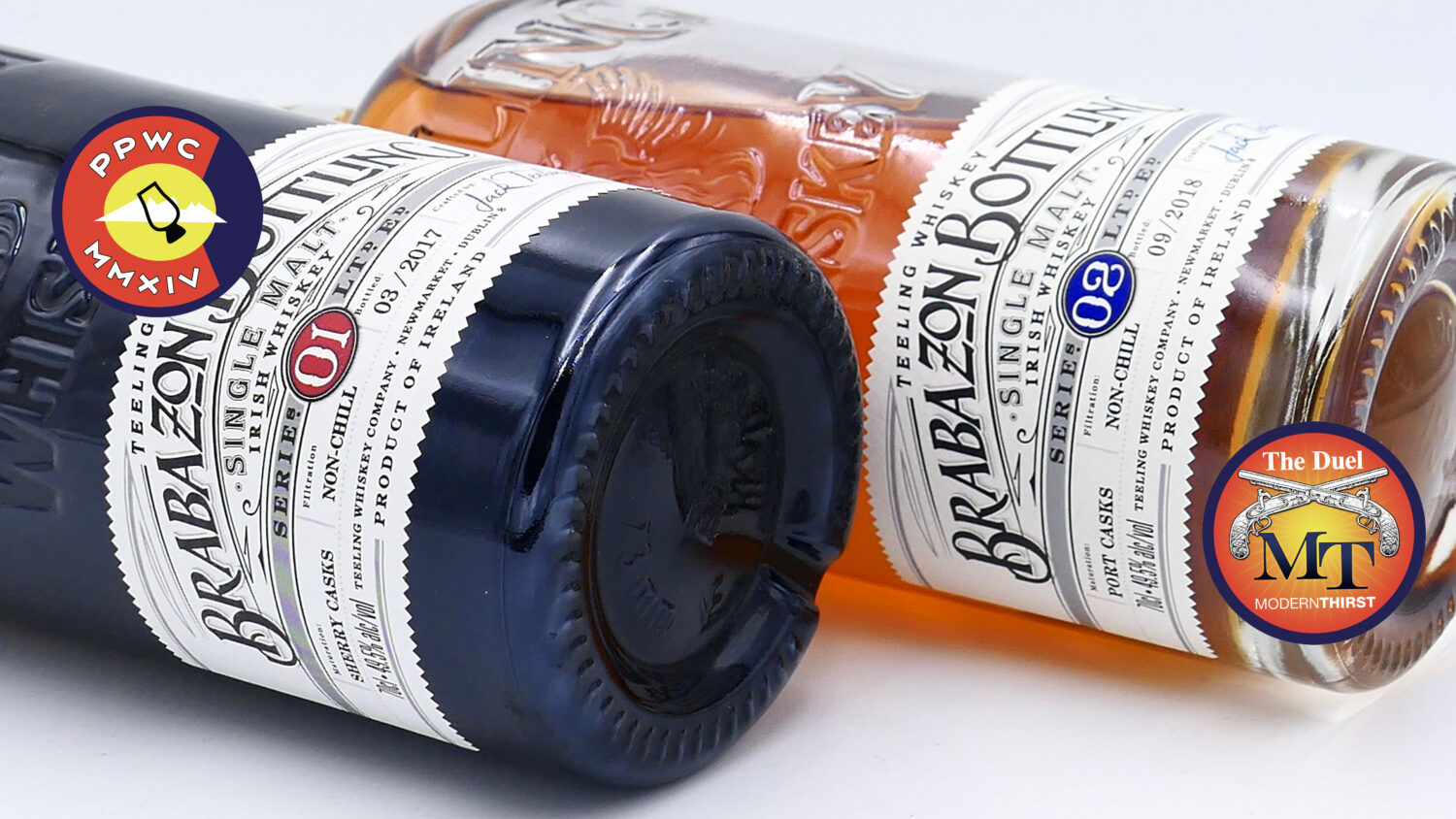 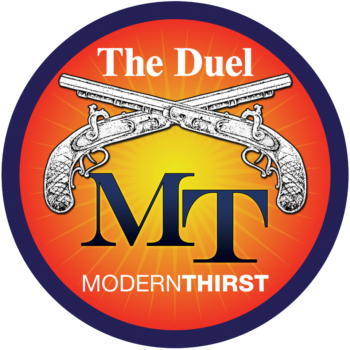 Today we have the third Duel installment on ModernThirst. In this effort, we will pit two (or sometimes even more) whiskies against each other in what we are labeling The Duel. As part of this new feature I’m going to bring in the thoughts, reviewing notes, and scoring inputs of some members of our Proper Pour Whisk(e)y Club (PPWC) to give multiple views on the whiskies challenging each other. Our club has been meeting for nearly six years now and have rated over 350 different whiskies on a 100-point scale very similar to that used on the ModernThirst site. In our monthly meetings we will typically have from four to ten different members rate a lineup of whiskies. The challengers in The Duel this month are: Teeling Brabazon Bottling Series 01 (Sherry Casks) and Teeling Brabazon Bottling Series 02 (Port Casks).

These two whiskies were chosen in honor of St. Patrick’s Day this month – unfortunately, I was not able to get the write-up completed to publish by March 17th (as we all know this has been a challenging season with the pandemic). But I guess better late than never. These two whiskies are not available in the U.S., to my knowledge. I ordered my bottles from overseas, and both are still currently available at some online retailers – and a prominent shop in Dublin, Ireland.

From the Teeling Whiskey packaging (tin): “William Brabazon, the 3rd Earl of Meath, presided over Newmarket in its formative era, growing it from the fledgling trading square he first established, to the bustling industrial heart of the Meath Liberties District of Dublin City during the 17th century. This Limited Edition Series embodies his unique character and spirit of innovation which have carried on through the revival of the Spirit of Dublin at our new distillery in Newmarket.” 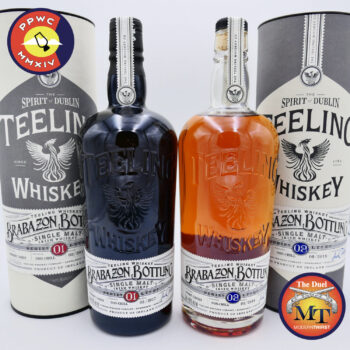 Notes for Jeremy and I, as usual are annotated below by the identifiers (JR) or (WJ). Other Proper Pour Whisk(e)y Club members will be listed by their initials – for this tasting Jeremy and I were joined by two other club members – (EJ) and (BJ).

As always – the notes you see below were written and the bottle scored prior to any significant discussion by the group of what we nosed, tasted, or felt overall, about the drams in consideration.  If nothing was included in the notes for a specific area by a taster I listed ‘no comment.’ The bottlings are identified as [Brabazon Series 01] and [Brabazon Series 02] in the breakouts below.  I’ll provide the notes and winner in each category – nose, taste, finish, balance – and the overall winner and breakout of scores in the synopsis.

[Brabazon Series 01] char note begins for me, dark fruits – jam, taste not on the level of the nose for me on this one, touch of rubber again (WJ); a bit hot especially for the proof, but this is yummy stuff, nice thick mouthfeel, honey, wood, chocolate, savory and sweet from the different sherries, a bit drying but pleasantly so (JR); sherry, grape skins, honey and toast, great mouthfeel (EJ); almonds, cherries, butterscotch, jam, honey, coffee (BJ)

[Brabazon Series 01] does not work as well for me as Series 02, decent but the port maturation wins for me (WJ); no comment (JR); very balanced (EJ); nice balance (BJ)

[Brabazon Series 02] really like this one, not usually a port over sherry guy but on this one the winner is the port bottling (WJ); no comment (JR); very sweet, but not unbalanced (EJ); no comment (BJ)

As I’ve noted before It is always interesting to compare the tasting notes from a group effort and to see how a whiskey interacts with us each individually and then to step back and look at the collective results. We all bring different experiences to the tasting table, different palates, and varied overall whiskey tasting histories. In our third duel the victory goes to the TEELING BRABAZON BOTTLING SERIES 02 (PORT CASKS), even though the group split two to two on overall first place votes. In the category breakouts the two whiskies tied on the NOSE, but in every other rated area the average for SERIES 02 took the honors for TASTE, FINISH, and BALANCE (by .8 points, .7 points, and .2 points respectively – on a 25 point scale).

Both bottlings are worth trying, but the sherry matured/finished whiskey did not quite rise to the occasion to take the Duel honors. Individual ratings, in order from low to high, for the tasters were: 86 [WJ], 89.5 [JR], 91 [BJ], and 92.5 [EJ] – the overall average above was rounded down in this case to the nearest .5 point.

If I were to choose one of these bottling to add to the collection it would be the Series 02.  My first introduction to this whiskey was in the Irish Whiskey Advent Calendar reviews for ModernThirst in December 2019.  Out of the 24 whiskies tasted in that effort the Teeling Brabazon Series 02 came in seventh overall. Individual ratings, in order from low to high, for this whiskey were: 90 [WJ], 90 [BJ], 91.5 [EJ], and 94.5 [JR].

Hopefully you enjoyed this third installment of the Duel format that included some other members of the Proper Pour Whisk(e)y Club – let us know what you think in the comments.  If you’ve tried either of these whiskies we’d love to hear your overall thoughts.  We are already planning out our future challenges. If there is something in particular that you’d like to see in The Duel send me an e-mail at wes@modernthirst.com. 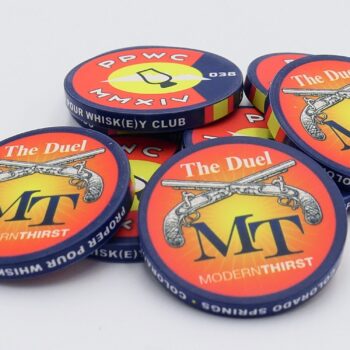 Finally, I wanted to share with you the opportunity to help out with the ModernThirst Duels and have the opportunity to receive some unique prize opportunities in future drawings.  Well over 98% of the whiskies that our PPWC club has tasted over the years and those reviewed on ModernThirst, that I’ve been involved with, have been purchased out of my own pocket – and whenever there is a whiskey reviewed that has been provided by an outside source we disclose that in the review. If you’d like to show your support of the Duels and be entered into a drawing to potentially win some Duel and/or other samples and prizes you can purchase one of the MT/PPWC Duel Coins for $15 each (includes the shipping cost). 100 coins are available with serial numbers from 26-125 (you can request a certain number if you like). After the first 10 coins are sold I’ll have the first drawing and let you choose the prize you’d like.  Another drawing, for all Duel coin holders, will take place when we reach 20 coins sold and so on. The random drawing will be based off of the coin serial numbers.  Send me an e-mail at wes@modernthirst.com if you are interested and I’ll arrange for payment and shipment.  At this time prize opportunities will be limited to residents of the U.S., but that doesn’t prohibit you from showing support or just adding to your whiskey coin collection.