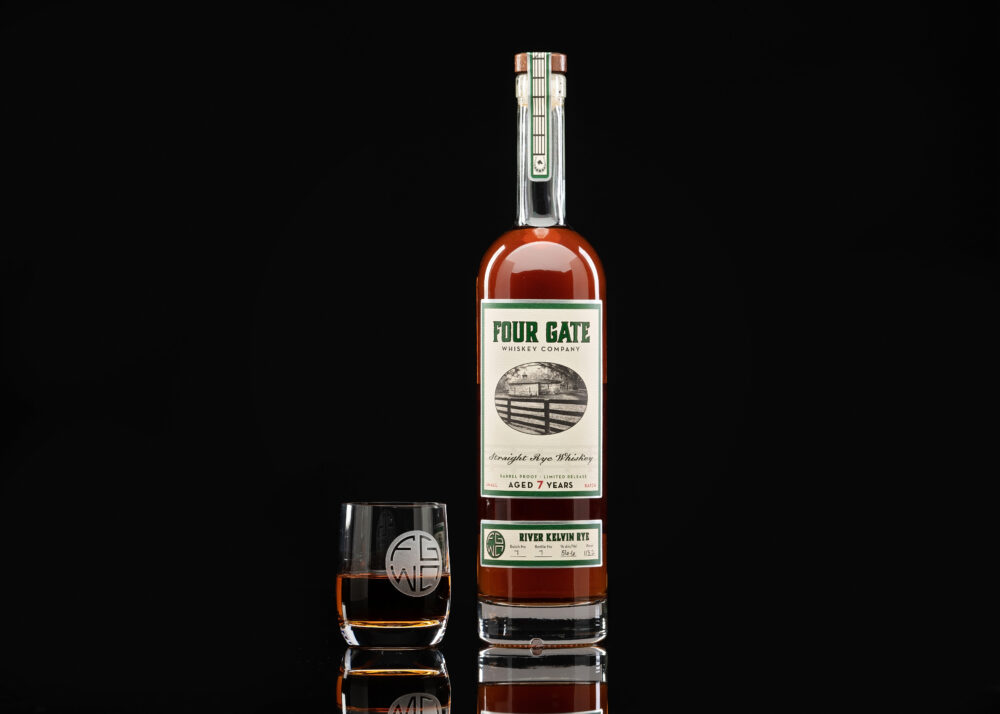 LOUISVILLE, KY, June 2nd, 2020 – In late June of this year, Four Gate Whiskey is releasing its first ever Straight Rye Whiskey. This Rye was distilled in Indiana to a mash bill of 95% rye, 5% malted barley. It is age-stated at 7 years old. It is non-chill filtered and bottled at its full cask strength of 113.2 proof. The batch has been dubbed “River Kelvin Rye.”

Previously, Four Gate Whiskey Company’s releases have all been either straight bourbon or barrel finished bourbon. This marks the first expansion of the company’s product line into a new spirit since its launch in 2018.

“We’ve always been on the lookout for barrels of great rye,” said Chief Barrel Officer Bob D’Antoni. “We tried all sorts of barrels that weren’t quite up to our standards before we found these.”

Four Gate Whiskey Company is releasing this whiskey without barrel finishing for a reason. The company plans to offer the same base whiskey in at least two different finishing styles over the next 12 months, and they wanted their customers to be able to taste the base spirit as well as the future finished products.

“That’s something I was interested in doing form the start,” Said Chief Blending Officer Bill Straub, “I wanted to show a progression, or a before-and-after. We pride ourselves on only using the highest quality whiskey we can find to barrel finish rather than taking a flawed spirit and trying to cover up its flaws with barrel finishes. This way, our customers can buy this first bottle of rye and then the finished releases over the next year or so and compare them side-by-side.”

Though the company did not collaborate with Kelvin Cooperage on a barrel finish, the Four Gate Whiskey Company was sure to pay homage to the cooperage in the batch name.

“River Kelvin is the river that flows through Glasgow, Scotland,” Said D’Antoni. “Kelvin Cooperage was founded in Glasgow and took its name from the river. We named this batch after the same river as attribute to Kelvin.”

Taste:                     A splash of refreshing mint hits the tip of the tongue and is followed by candied oranges and lemon zest on the mid palate. The rear palate is greeted with spicy black pepper and sweet citrus.

There are 1,484 bottles of this release available in late June in Kentucky, Tennessee, and online through Seelbachs.com at a MSRP of $174.99

Facebook Comments
Previous ArticleBattle On The Hill (Heaven Hill bonded… and one weirdo)
Next Article The “future” of cocktails.