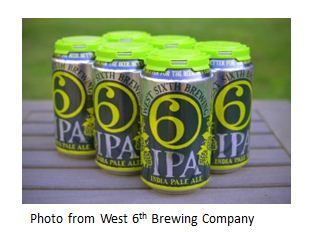 Today’s Daily Toast is an important one. So readers: take note.

Today is an important birthday to us here at Modern Thirst. On this day in 1935, just 79 short years ago, canned beer was first invented. In Richmond Virginia, the first shipment of 2,000 cans of Krueger’s Cream Ale and Krueger’s Finest Beer were delivered to anxiously awaiting drinkers in Richmond Virginia. Their feedback was so positive that Krueger went into mass production mode immediately.

This wasn’t the first attempt at canned beer. Some 24 years earlier, a first attempt was made, but the tin used in cans left a horrid after taste, and the lack of pressurization meant a bad experience that never left the experimenters’ table. No, January 24th is the birthday of commercial canned beer. And we thank the Gottfried Krueger Company for it.

These days, about 50 % of the beer sold in the United States is sold in cans. While canned beer was, for some time, regarded as a cheaper alternative lacking in taste used mainly by macro-brewers to mass-produce low-end pilsner, there has been a strong resurgence in the use of cans as brewers have realized the aluminum can works to prevent light damage and oxidation of the beer in transport.

A great example is very close to home here in Kentucky. West 6th Brewing Company in Lexington, KY produces a variety of excellent craft beers that appeal to both craft beer lovers and the general uninformed beer-drinking public. Their beers are packaged in environmentally friendly recyclable aluminum cans. At their tap house in Lexington, there is usually a wide variety of beers to try. In the region, you can look for their flagship cans of IPA and Amber at local beer stores. The IPA is a great drinking, hoppy little beer. It’s sold in 6 pack cans, and you can find it on draft in the area. It’s strongly recommended by Modern Thirst. You can visit them online at http://www.westsixth.com