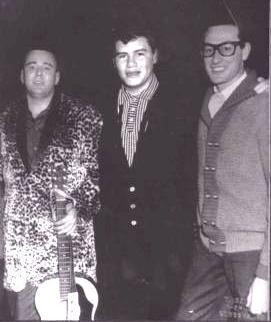 “I can’t remember if I cried

when I read about his widowed bride,

but something touched me deep inside

The day the music died.”

On this day in 1959, a chartered Beechcraft Bonanza crashed in an Iowa Cornfield killing its pilot and three passengers. The passengers were Buddy Holly, Ritchie Valens, and J.P “The Big bopper” Richardson.

The three were considered, along with acts such as Elvis Presley, to be the rising stars of the burgeoning U.S. Rock and Roll scene. The genre of music was in its infancy, and Buddy Holly was well on his way to becoming one of the first symbols of the movement. Holly was the most accomplished of the trio, was 22 years old, and had already scored hits with songs like Peggy Sue, Oh Boy, Maybe Baby, and Early in the Morning. He had opened for acts including Elvis, and his band included future star Waylon Jennings.

17 year old Ritchie Valens already had three charting hits at the time of his death, and was later immortalized in the 1987 movie La Bamba, which drive his arrangement of the traditional Mexican song of the same name performed by Los Lobos became a #1 hit almost 30 years after his death.

And The Big bopper was a popular singer with brazen stage show and several popular rockabilly radio songs.

In 1972, singer-songwriter Don McClean memorialized the three stars in his number 1 hit song American Pie, where he coined the phrase “The Day the Music Died” referring to their death in that Iowa cornfield.

Raise a glass today in remembrance of these three early pioneers of rock and roll. Cheers!