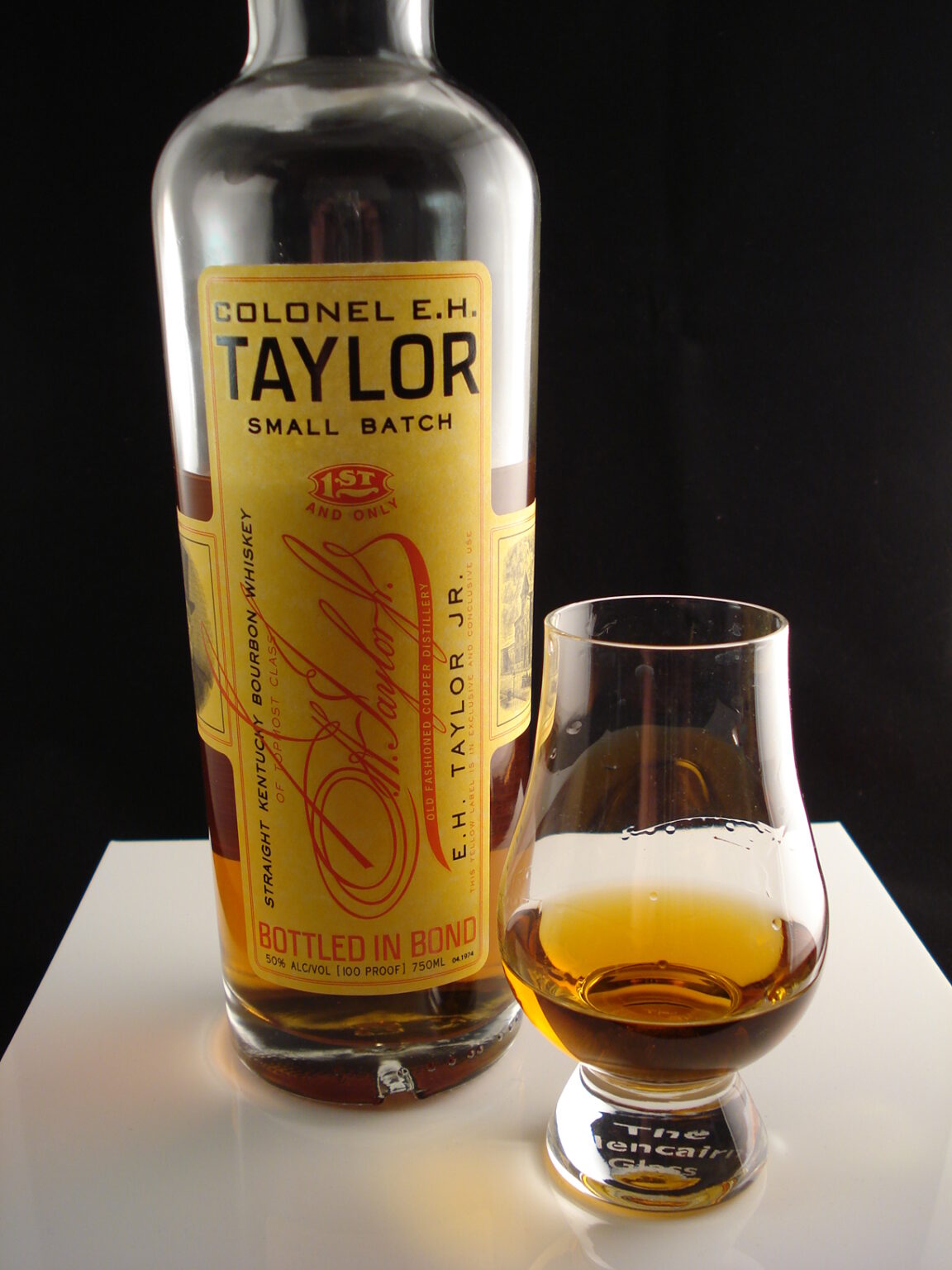 This is a high-proof bourbon that doesn’t particularly need ice or water to open it up, but a touch of H2O doesn’t hurt it at all. At under $40, it’s a no brainer.

Last week, we posted a poll to allow our readers to choose the next bourbon we reviewed.  The winner was a run-away victory for Col. E. H. Taylor, Jr. Small Batch.  We are not ones to let our readers down, so here it is:

The Col. E.H. Taylor, Jr. line has been big news on the whiskey circuit since the line was introduced in 2011.    The line boasts several different offerings, including several bourbons and a rye.  The Small Batch Bourbon is the entry level offering in the line that debuted in 2012, aged 7 years, and clocks in at 100 proof.  I found it at a local store for $39 for a 750ML.

The Taylor line is produced by Buffalo Trace in Frankfort, KY, and is named for Colonel E. H. Taylor, Jr.  Taylor owned the distillery in the mid to late 1800s, and is credited with revolutionizing bourbon production.  His historic brick warehouse on the Buffalo Trace property pioneered climate-controlled aging, and is used today for the aging of the Taylor line.  These are limited release whiskies, and the Small batch took home a Silver Outstanding Medal at the 2013 International Wine & Spirits Competition, so don’t expect it to be available on shelves indefinitely.

The Small batch offering is packaged much like the rest of the line, in tall, attractive bottles with yellow labels, packaged in a cylindrical hard canister that harkens back to the packaging methods of Col. Taylor himself over a century ago.  While I applaud the nod to history, the container method of packaging doesn’t add much to a bottle’s attractiveness, as most will remove the bottle from the container when displaying it anyway.  Nonetheless, it’s a very nice overall appearance.

The initial smell is a salty sweetness with hints of butterscotch and spices.    At 100 proof, this isn’t a weak bourbon, and you can definitely catch the alcohol on the nose.

The initial flavor doesn’t disappoint.  The first hints are of caramel corn and pepper, with a building butterscotch sweetness on the back end.

There is just enough bite on the finish from the alcohol content to make this a very pleasing sipping bourbon.  It’s ultimately a medium-to-long finish with more of the caramel and butterscotch lingering throughout.

Excellent bourbon.  As per our standard procedure, I tried it neat first and caught just a touch of harshness on the tip of the tongue before it settled into a smoother bourbon.  The second taste was done on the rocks.  It’s high enough proof to remind you you’re drinking good old fashioned whiskey and holds up very well over ice.  This is a high-proof bourbon that doesn’t particularly need ice or water to open it up, but a touch of H2O doesn’t hurt it at all.  At under $40, it’s a no brainer.