This is a must-try for any bourbon enthusiast, and a must-have in any serious bourbon collection. It’s a stalwart of small batch bourbons, and the true pioneer of the uncut, unfiltered, cask-strength trend that permeates the bourbon industry today. 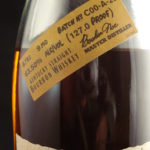 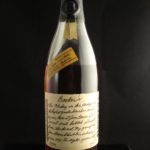 Booker’s is the strongest offering from the extremely popular Jim Beam Small Batch Collection.  Introduced in 1992, it is a barrel-strength bourbon that is aged 6-8 years and goes into the bottle at around 63% alcohol, which rounds out to 125 proof.  The folks at Beam say it can range anywhere from 121 to 127 proof, depending on the barrel.  Our bottle is 63.5% alcohol, or 127 proof.  It was aged 6 years, 9 Months, and is from Batch C00-A-20.

The bourbon takes its name from the grandson of Jim Beam, Booker Noe, who was Distiller Emeritus at the time of the product’s launch.  The story goes that originally, the line was produced by Booker only to be used as gifts for family and friends, as he personally selected the barrels from his favorite section of his favorite warehouse.  Eventually, the company realized the demand for such a product and, thankfully, released it for general sale in 1992. 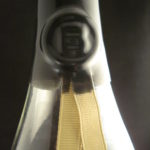 Booker’s is an extremely well packaged bourbon.  The bottle is sold in a wooden display box with a glass top.  The bottle itself is a tall, sloped-shouldered bottle with black wax on the cork and an attractive cream label with a printed handwritten font.

The bourbon itself is a very deep, dark liquid with a deep amber-gold color.  The age and proof are on display here, and it invites a cautious sip.

The first whiff on the nose is rife with heavy wood and oak scents.  But it is followed by a smokiness and toffee/caramel hint on the back end.  It smells lush and inviting, but there is a hint of warning of the alcohol content as well.

The high proof is evident immediately.  This bourbon is not for the faint of heart.  It’s a big, bold, powerhouse bourbon right on the tip of the tongue.  It begins with intense fruit and leather flavors, but the intensity gives way to vanilla and oak on the back of the tongue.

In both tastings, the finish was very long.  Drank neat, the alcohol remains evident throughout, and the burn, which not entirely unpleasant, is strong.  There is a spiciness on the finish that begs a second taste.

At such a high proof, it is almost a given that most bourbon drinkers will sip this over ice or with a touch of distilled water.  As such, I tried it with some distilled water and was not let down in the least.  Booker’s comes alive.  The power of the bourbon remains clear, but the fruit and vanilla aromas explode on the nose, with peach and tobacco on the tongue.

Booker’s is not a new offering on the street.  Now having been on the market for over 25 years, it isn’t an uncommon site at well-stocked bourbon retailers.  However, it is a big, strong, powerful bourbon, and probably isn’t for the casual drinker.  At the very least, it needs a splash of distilled water to bring out the complexities of the spirit.

At around $60, this isn’t an everyday bourbon for most people, either.  It is an excellent change-of-pace for those looking to add a barrel-strength bourbon into their repertoire, and its packaging, price, and strength make it a nice bourbon gift.  As a sipper, it’s a huge bourbon, and it’s clear why the recent 25th anniversary limited release offering was such an event.  This is a must-try for any bourbon enthusiast, and a must-have in any serious bourbon collection.  It’s a stalwart of small batch bourbons, and the true pioneer of the uncut, unfiltered, cask-strength trend that permeates the bourbon industry today.  It ticks all the right buttons for a bourbon enthusiast.