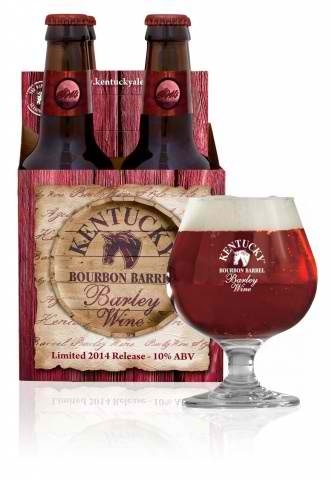 This press release makes us here at ModernThirst very Thirsty!

Kentucky Bourbon Barrel Barley Wine is a traditional American-style Barley Wine aged for six weeks in freshly decanted Kentucky Bourbon barrels. With a rich, malty backbone and a citrusy aromatic hoppiness, this craft beer comes together to create a well-balanced flavor profile and ruby-red color. The complex brew mellows into a balance of sweet malt, vanilla and caramel notes and bitter hops – creating a delicious Kentucky version of a beer style that originated among the British aristocracy. At 10 percent alcohol by volume (ABV), this limited seasonal release is a perfect sipping beer to enjoy as the last notes of winter finally melt away.

“Barley wines are big, bold and usually a big hit with craft beer drinkers, especially since the market isn’t saturated with them,” said Ken Lee, master brewer for Alltech Lexington Brewing and Distilling Co. “They’re something a little different. It’s been a lot of fun for us as brewers to build upon our barrel-aged seasonal series, and to see how quickly these types of beers fly off the shelves.”

Alltech Lexington Brewing and Distilling Company’s barrel-aged seasonal program allows the brewery to step outside of its year-round offerings and further its reputation as one of the largest barrel-aging operations in the country. The brewery regularly ages 3,000 to 5,000 barrels at a time, and handles up to 1,000 barrels per week. The brews in the seasonal series are finished using the same process as Kentucky Bourbon Barrel Ale® and Kentucky Bourbon Barrel Stout™, two beers in the brewery’s year-round lineup, which are both aged in bourbon barrels for six weeks. The company also plans to follow up Kentucky Bourbon Barrel Barley Wine with a barrel-aged summer seasonal.

Seasonal brews are traditionally very popular among craft beer enthusiasts, with 84 percent of craft beer consumers saying they like to choose their beer depending on the season (Mintel, May 2013).

Kentucky Bourbon Barrel Barley Wine will be available in limited quantities in the 20 existing domestic territories where the company’s beer is distributed. It will be sold on draft and in 4-packs of bottles. The suggested retail price for the 4-pack is $14.99. The new seasonal will also be available for visitors to sample at the newly-renovated beer tasting room at the Alltech Lexington Brewing and Distilling Company brewery. The brewery is at the same site as the Town Branch Distillery, which is a member of the Kentucky Bourbon Trail® and located at 401 Cross Street in Lexington.

Four-packs of Kentucky Bourbon Barrel Barley Wine will soon hit shelves across the country and is the second in the barrel-aged seasonal series produced by Alltech Lexington Brewing and Distilling Company, located in downtown Lexington. The ruby-red brew features a rich, malty backbone and citrusy aromatic hoppiness, and picks up sweet notes of vanilla and caramel from being aged in a bourbon barrel for six weeks.