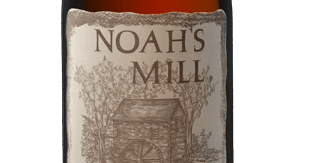 *Note: this review was on a 15 year old age-stated bottle produced prior to 2012. Newer bottles of Noah's Mill are not labeled as 15 year old straight bourbon, and may differ significantly in flavor profile.*

*Note: this review was on a 15 year old age-stated bottle produced prior to 2012.  Newer bottles of Noah’s Mill are not labeled as 15 year old straight bourbon, and may differ significantly in flavor profile.*

Noah’s Mill is a small batch bourbon bottled in Bardstown, KY by Kentucky Bourbon Distillers, Ltd, and is distributed as part of the Willett family of bourbons.  Willett has only recently completed production of their own still, which means this bourbon is distilled elsewhere and purchased by Willett.   I find it readily available in most liquor stores with a serious bourbon shelf for around $60 or less.  It is aged 15 years and bottled at 114.3 proof.  It’s actually a shockingly low price for a bourbon aged 15 years, and I expect that as more people become aware of this line, its availability will decrease substantially.

A deep, amber, this bourbon is smoky and appealing.  The bottle is an antiqued greenish hue with a taupe label depicting what I assume is Noah’s Mill, and it proudly declares that it is “Handmade in the Hills of Kentucky.”  It is corked and sealed with wax.  It’s a very attractive package, and looks more expensive than it is, which is very befitting a 15 year old bourbon.

Definite notes of toffee, coffee, and caramel on the nose.  It smells warm and inviting, with a  smoky sweetness.

The initial taste reveals the crispness of the rye on the front of the tongue, which follows with vanilla and cream flavors.  The Proof begins to show its nose midway through, with a good alcohol heat on the middle of the tongue with a some notes of spicy cloves.  Very heavy oak and tannins power through on the back end of this as the age becomes much more prevalent, rounding out the experience.   It does become just a touch bitter on the back of the tongue, which indicates this distillation is probably at the maximum aging limit for the particular mix.

Very long and satisfying.  Though this is a 114 proof bourbon, it doesn’t feel like it.  It’s very smooth.

As is our custom, I tried it neat first.  The addition of ice on the second pour did nothing to damage the flavor of this whiskey, and actually accentuated the vanilla flavors on the front of the tongue.  A splash of water works just as well.   This bourbon works just fine sipped neat or with ice, and I find it a little hard to believe this hasn’t taken flight (in both scarcity and price) with the recent bourbon boom.  It’s a top-notch bourbon.

I score this bourbon 89 out of 100 points, and definitely recommend it.