It’s hard to find fault with a bourbon this complex in this price range. At $35 or less, Elijah Craig remains a popular value buy amongst discerning bourbon drinkers, and is a staple of many bourbon bars.

Named for the 18th century Baptist Minister generally credited with pioneering the use of charred barrels, Elijah Craig is a 12 year old small batch offering from the Evan Williams catalogue of bourbons distilled at the Bernheim facility in Louisville, KY and bottled by Heaven Hill in Bardstown, KY.  It clocks in at 94 proof. 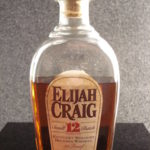 Elijah Craig is packaged in a Sloped-shoulder cordial-style bottle with oversized cap covering the cork.  The label is cream and red.  It is an attractive packaging, though it doesn’t particularly stand out.

This bourbon poured a dark copper into a Glencairn tasting glass.  There is a definite hint of cloudiness. 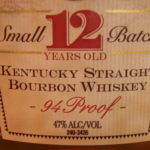 The nose is greeted with vanilla and caramel up front with a definite undertone of aged oak.  The aroma hints at the promise of some orange zest and citrus on the back end, though they don’t fully materialize.

This bourbon jumps right out of the gate on the tip of the tongue with maple and caramel flavors giving way to rye and spiciness on the middle of the tongue.  The age comes through on the tail with strong notes of oak and bitters.

Very long and powerful.  The oak continues, with pepper and cinnamon lingering well after the swallow.

It’s hard to find fault with a bourbon this complex in this price range.  At $35 or less, Elijah Craig remains a popular value buy amongst discerning bourbon drinkers, and is a staple of many bourbon bars.  At 94 proof, it’s just the right ABV to sip neat or with a splash of water.  Adding some distilled water opens up those citrus notes on the nose, but doesn’t greatly affect flavor.  Ice begins to overwhelm this bourbon, but its price makes it attractive in some bourbon cocktails such as the Old Fashioned and the Manhattan.  If you must drink this on the rocks, limit yourself to one small cube; just enough to cool down the liquor.

Elijah Craig is worthy of its praise, and drinks like a bourbon of a much higher price tag.