I happened to be in Frankfort, KY yesterday at a non-bourbon-related family gathering when my cousin-in-law asked me if I’d ever visited the crumbling remains of two of Kentucky’s older and more renowned defunct distilleries: Old Crow and Old Taylor.  I jumped at the chance.  We didn’t have time to get out of the car and walk around, but a few cloudy photos from my cell phone from the car was better than nothing.The distilleries are located in Millville, a small Frankfort suburb located south of the commonwealth’s capital city on Glenn’s Creek, which provided water for the two distilleries in their heyday.  Glenn’s Creek Road is a long, winding, narrow affair along the creek itself, lined with small homes and an abundance of scenic greenery.  Winding down the road from the capital itself, the distilleries appear almost out of nowhere as the road reaches the bottom of a small valley.

Old Crow was built around 1872.  It was refurbished in the early-to-mid 1960s, and operated until a buyout from Jim Beam brands in 1987.  Beam use the warehouse facilities for some years, eventually declaring them excess space and ceasing use until very recently, when some of the better-preserved warehouses were refurbished and placed back into use.  On our drive, several Jim Beam branded tractor trailers were on site unloading barrels.

There isn’t a lot of the actual Old Crow distillery to see from the road, unfortunately, other than a series of warehouses.  But Old Taylor is a different story.  Old Taylor was originally built in 1887, and was designed to be a showpiece for the Kentucky distillery industry.  It was in operation until 1972.  The main facility is built to resemble a castle, and is made of Kentucky Limestone.  Originally, the grounds were manicured and park-like.  Today, it too is overgrown and in disrepair.  The two locations have earned a reputation of late as bourbon-fanatics have visited the area hoping to see the distilleries up close.  Due to their condition, they are off-limits to tourists, and full-time security has been on site to shoo away site seers.  On our visit, the “no trespassing” signs were still hung, but there was no sign of security, and the main gates to Old Taylor were wide open, allowing several other groups of site seers on the premises.  If only we’d had time to stop!

But there is hope.  The Main Old Taylor buidling is still an impressive structure, well-worth a drive-by.   Both distilleries’ main facilities have been purchased with plans for restoration.  So hopefully these grand old buildings, so important to the history of Kentucky Bourbon, will get a breath of new life and be open to the public again soon.  So enjoy the photos, and hopefully there will be a chance for a more formal visit soon.  If you’ve visited these sites, or any other distilleries, and would like to share your photos and experiences, feel free to post them in the comments section below or email them to Bill@modernthirst.com and we’ll publish them  for our readers! 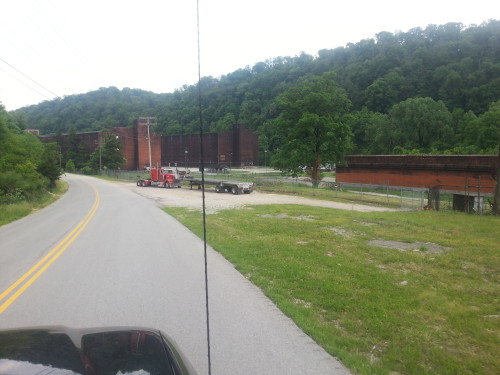