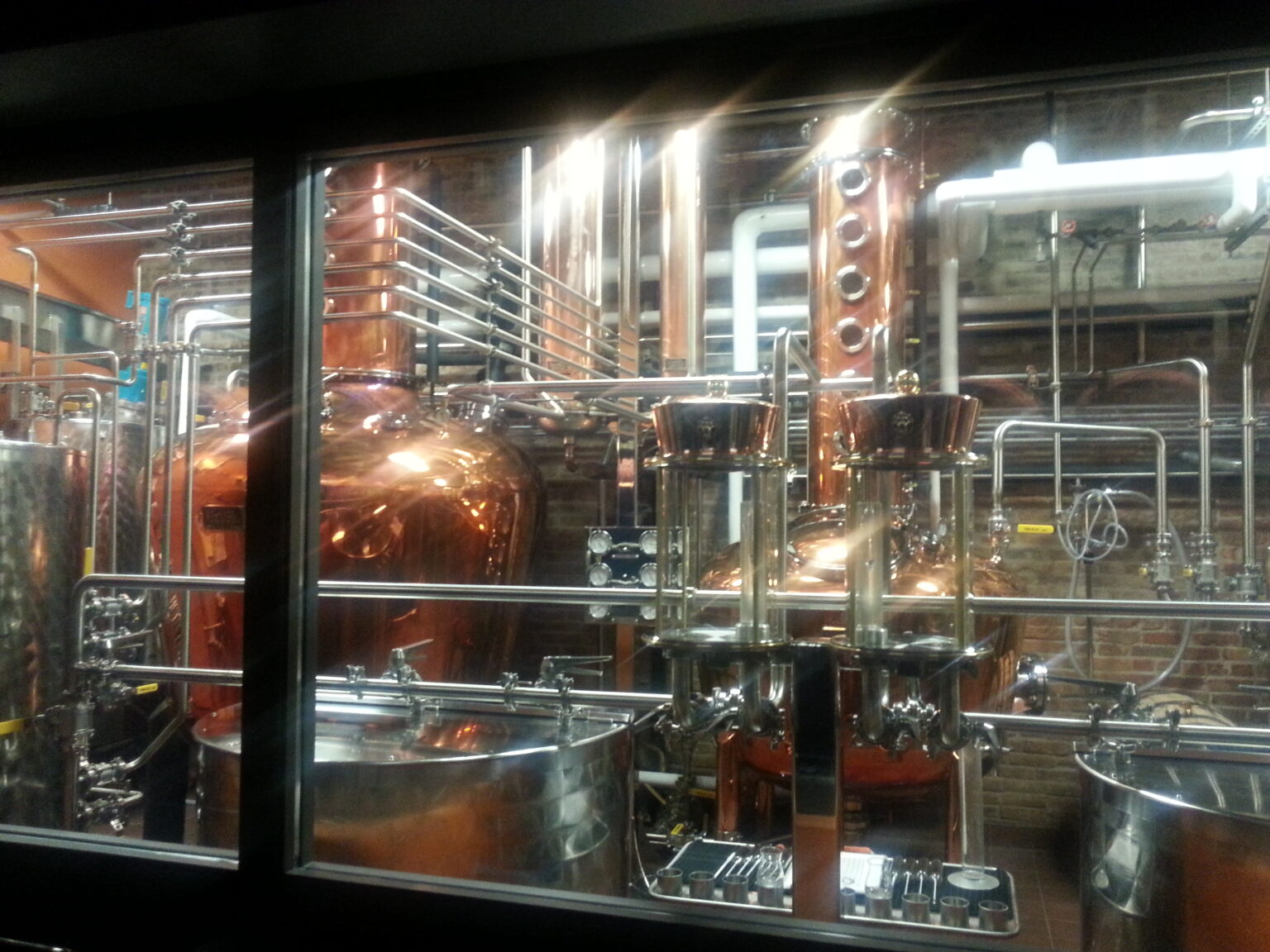 It was hot and muggy in Louisville when Modern Thirst founders, Bill and Matt (hereafter referred to as the “Modern Thirst Brain Trust,”) stepped down Main Street and entered the Evan Williams Experience.  Once inside, it was cool and full of bourbon goodness.  The Evan Williams Experience is one of the latest additions to the Kentucky Bourbon Trail and marks the first stop of the trail located on Louisville’s historical Distiller’s Row.

The facility itself is not a large building, slightly larger than a large row-house in many cities.  However, it contains the distillery, a re-creation of 18th century Louisville’s waterfront and main street, and a second section containing a recreation of Louisville’s Distillery Row in the 19th and early 20th century, complete with a pre-prohibition style tasting room and a 1950s style “Mad Men” tasting room.  The tour ends at a well-stocked (and expensive) gift shop.

The tasting consisted of Evan Williams Single Barrel and Elijah Craig (which the tour guide incorrectly referred to as a “wheated” bourbon). 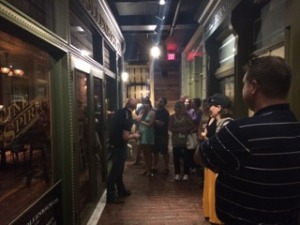 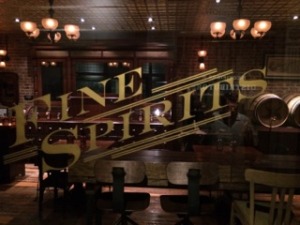 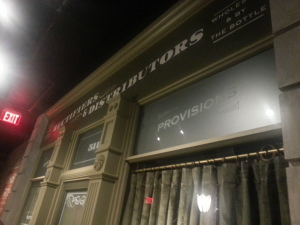 The facility is obviously too small to contain an actual rick house, but a mockup is on site.  Our efforts to carry away one of these barrels was fruitless, as they are not actually filled with aging bourbon, saving us from nearly guaranteed jail time. 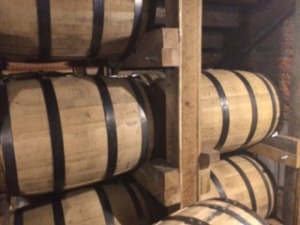 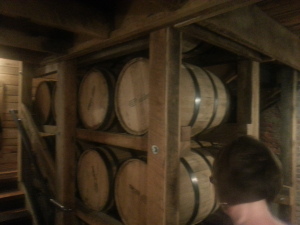 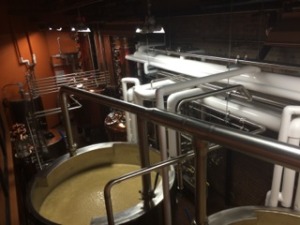 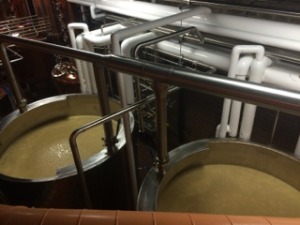 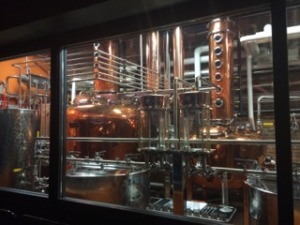 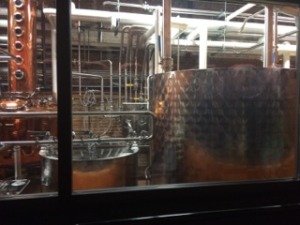 Matt was so giddy with anticipation at the prospect of tasting bourbon that he nearly wet himself. 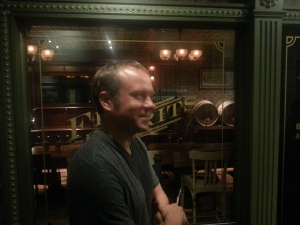 Projection screens showing vidopes portraying the Louisville Waterfront in the 1700s.  No Oscars were awarded for this production, suffice to say. 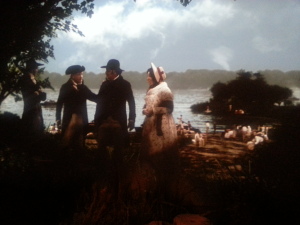 More views of the distilling room: 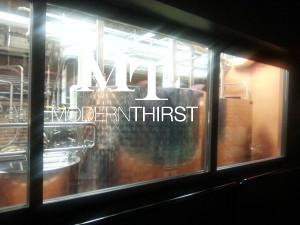 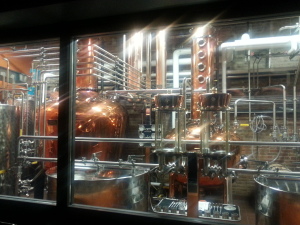 The process of making bourbon…note the pretty colors: 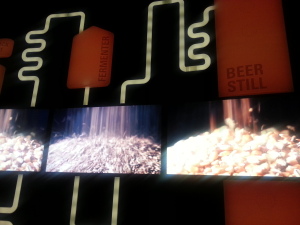 FINALLY!  The tasting room!  Seeing the barrel and tap, I suggested a growler system, similar to craft beer, to the tour guide.  He was not amused.  Also, the tap was for show only.  So disappointing. 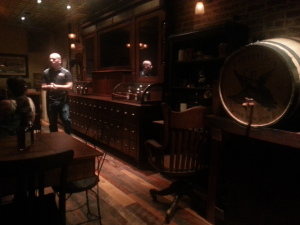 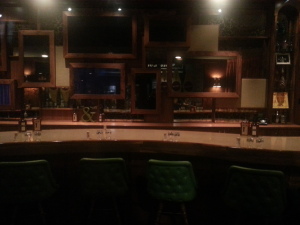 AAAANNNNDD finally the tasting itself:  Elijah Craig on the left, Evan Williams Single Barrel in the middle (That’s water on the right, for those who are brown-clear color-blind). 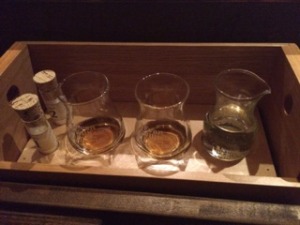 The 1950s era tasting room that we did not get to enter: 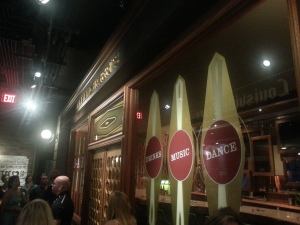 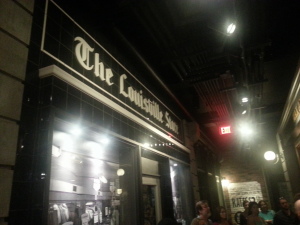 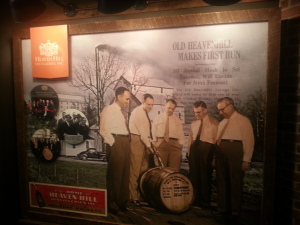 Bourbon Swag is available in the gift shop.  Just be prepared to take out a second mortgage on your home (or sell a kidney)  if you want to purchase actual bourbon. 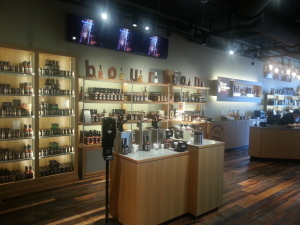