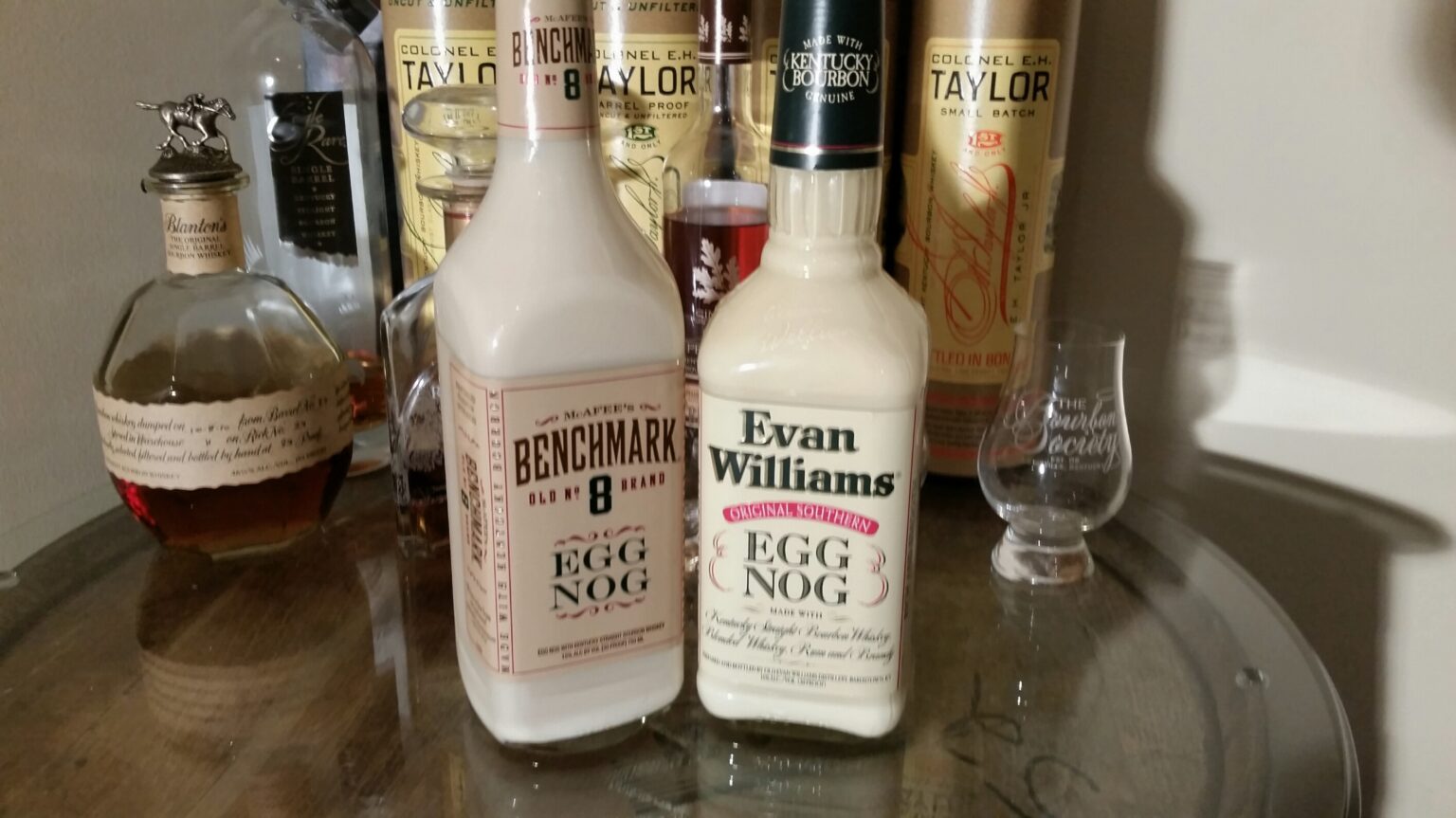 Deck the Halls with Bottles of Nog! New Recipe Added!

I don’t know about you, but I probably look forward to the holidays more each year for one reason more than any other:  Eggnog.  It’s terrible for my health, it’s loaded with sugar, and it does a number on my stomach, but OH BOY do I love it! 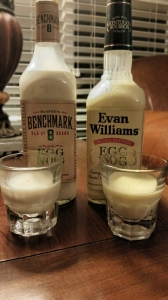 According to the roughly 3 million search results I got when Googling “origin of Eggnog,” it rose up on both sides of the Atlantic around the 17th century, but there is some debate as to where the name itself comes from.  It may be from an East Anglian term for a strong beer, “noggin,” or it may have been a new world colonial slang term for thick, heavy drinks called “grog” (and hence “egg-and-grog.”)  Personally, I have no clue.  Thank goodness for the interwebs.  Regardless, it seems the British version was a wine-based drink mixed with egg and milk.  And since egg and milk were rare (they were hard to preserve before refrigeration) and expensive, it was a drink of the upper class.  Riight.  Wine, eggs, and milk?  the Brits can have it.  In typical Yankee fashion, American colonists scoffed at that, and were mixing egg and milk with rum by the 18th century, proving that we know best when and how to properly utilize hard liquor and dairy.  The agrarian nature of the colonies and the abundance of farms meant fresh eggs and milk were readily available here, and eggnog became a popular drink for all levels of society.  Truly, eggnog was the first egalitarian dairy and liquor drink.  Maybe.  I’m too tired to Google that, too, so I’ll just run with it.

I figured I’d start out by trying a couple pre-bottled, pre-spiked eggnog offerings from our friends at Buffalo Trace and Evan Williams.  I’ve seen them on shelves before, and always took the approach that I’d rather get great eggnog and add bourbon myself.  But then again, I didn’t have a whiskey blog last year, either, and that opens brand new doors of wasteful and needless tastings to me all for my own entertainment and yours.  These both check in at 30 proof, so 15% ABV.

However, this isn’t exactly top shelf…well…anything.  The eggnog isn’t fresh, and it’s not exactly George T. Stagg they’re mixing in there.  So a standard ModernThirst rating doesn’t cut it.  I’ll use a more season-appropriate scoring method:  Holiday Wreaths.  Five wreaths is the best, no wreaths is the worst. 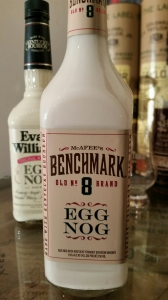 Buffalo Trace has a hit on their hands with their Bourbon Cream, and I expect we’ll have a post about that at some point as well.  So it only makes sense that they produce a spiked eggnog as well, right?  Benchmark   is certainly lighter in shade than Evan Williams.  As a matter of fact, it’s almost white.  The smell is all eggnog.  Nutmeg, maybe cinnamon, and plenty of sugary sweet eggnog with that warm, comforting underlying hint of bourbon right behind it.  Smells like Christmas to me.  And Diabetes. But this is a drinking site, so we’ll ignore that.

It tastes, well, like cheap egg nog mixed with cheap bourbon.  There’s a minimum amount of egg and dairy flavor, but a nearly overwhelming amount of nutmeg spices, almost as if they’re trying to cover up the processed, pasteurized mix that on vaguely resembles true, fresh eggnog.   But just before it becomes offensive, that rush of sweet bourbon flavor flows in to save the day.  Again, this isn’t top shelf premium bourbon, but it gets the job done. 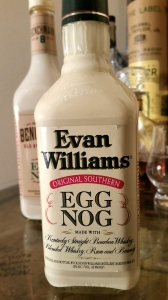 Evan Williams eggnog has been on more shelves over the past year than I can shake a stick at.  And no, I don’t just mean last holiday season.  It was on shelves for months and months.  If a drink made primarily of eggs and dairy sitting on shelves for months doesn’t worry you, well, you’re made of sterner intestinal stuff than I.  Nonetheless, I expected this to be a pretty good drink, as Heaven hill tends ot make good products.  But I worried that the charred oak flavors of Evan Williams wouldn’t mesh well with nog.

Evan Williams clearly agreed.  Instead of mixing bourbon and nog, the folks at Heaven Hill decided to go a step further and make a witches brew of nog, 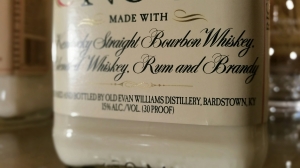 bourbon, and pretty much everything else they had sitting around on their home bar.  Right there on the label, it says “Made with Kentucky Straight Bourbon Whiskey…” So far so good.  The next line says: “…blended whiskey, rum, and brandy.”  Oops.  Sometimes, it’s best just to know when to quit.  Whoever concocted this one has not learned that lesson.  So unless the eggnog mix they’re using is putrid beyond belief, they just missed the boat by throwing everything they could find into this.  I think both 18th century Brits and Colonists alike would join arms in brotherly distaste at this one.

Anyway, this one tastes over-spiked.  There’s a weird heat to it that shouldn’t be in eggnog.  It’s clearly, in my opinion, the rum and brandy fighting with bourbon.  They just don’t work here.  It almost completely drowns out any semblance of nog.  Despite my fondness for Evan Williams and all things Heaven Hill, I have to advise you to pass on this one.

These both suffer from some common problems.  One, as the fine folks over at Bottom of the Barrel Bourbon so eloquently put it: “When we start drinking unrefrigerated premixed eggnog, the terrorists have already won.”  That shows through clearly here, as the eggnog itself tastes, well, kind of bad.  But also maybe low end bourbon, no matter how drinkable it is on its own, really isn’t cut out for dairy drinks or eggnog.  Eggnog is a stout pour, and needs a strong and very sweet bourbon to compliment it.  I did try both of these neat and on the rocks, and to be honest, ice cold is probably the way to go, as the cold somewhat numbs the tongue.

I suppose the question must be asked:  Bill, is it even possible for one of these premade concoctions to achieve 5 Holiday Wreaths, the rarest and most coveted review score in holiday beverage history?

To that I answer: I have no idea.  But I’ll pour myself another glass of this…err…liquid…and let you know later when the buzz wears off.

In the meantime, if anyone has a good personal recipe for great eggnog, and if anyone is spiking egg nog at home on their own (like maybe with our December Bourbon of the Month, Larceny), let us know!  Share your photos, recipes, etc!  Let us know what you’re mixing with it!

Here’s a mix we came up with in the Modern Thirst compound:

Yeah, I made that name up.

This is a home mixed cocktail, but it’s worthy of a taste.  I started with Hood brand Pumpkin Eggnog and added bourbon.  Which bourbon to choose?  I wanted something on the spicy side, not overly Sweet, since Egg Nog is already about as sweet as it gets.  So I started thinking of what flavors I would add to either eggnog or pumpkin pie.

Vanilla and cinnamon came to kind.  And no bourbon is as strong with cinnamon flavors as Knob Creek Single Barrel.  Its 120 proof goodness starts with spicy vanilla and ends with a cinnamon red hot finish that is out of this world.  This was an excellent choice.  I recommend trying this before the pumpkin nogs are off the shelves for good.

This should be a high ratio of nog-to-bourbon to make up for the fact that Knob Creek single barrel is a STOUT bourbon at 120 proof.  I recommend about 3:1 or 4:1 depending on your taste.

Happy Holidays from Bill, Bill, and Matt at ModernThirst.com!