While far from a terrible bourbon, the base whiskey in this bottling from Wild Turkey needed another year or two in the barrel before finding its way into my glass. The Ethanol characteristic robs it of the enjoyment the rich aromas promised.

What do you get when you blend (purportedly) 6, 8, and 10 year Wild Turkey distillate into one barrel proof batch?  Wild Turkey Rare Breed.  This whiskey has long been on my radar to try, and honestly, it’s been pushed to the forefront for one big reason: Wild Turkey has been bottling outstanding bourbon for the past 12-18 months.

But Bill, you might interject, LOTS of distillers are making good products.  I agree.  However, I would propose to you that Wild Turkey has spent some time in the desert trying to rediscover what made the line great from the mid 70s to the late 90s when things (such as barrel-entry proof and ownership) began changing at the Lawrenceburg distillery.

I would also suggest to you that after a brief period of stabilization around 2010-2012, Wild Turkey took a further nose dive in the the ensuing years that left it a bit out of the premium bourbon conversation.  2015 changed that.  The product appearing in bottles of Wild Turkey was sweet and luscious again, and Russell’s Reserve Single Barrel bourbon became one of, in my opinions, the most consistently excellent barrel select programs on the market.  In addition, the standard 101 product has been rife with gingerbread goodness at a shockingly low price as well.  In short, the Kickin’ Chicken was back, baby! 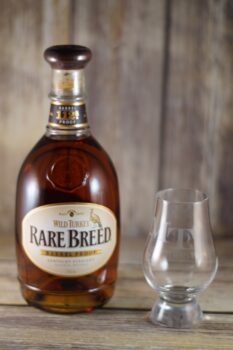 Rare breed is packaged in a short rounded bottle with attractive paper and foil label on the front.  The proof is denoted on the neck with a large wooden cork atop the mouth.  Very Nice.

Pale gold, straw, and bright.  For a bourbon that is ‘uncut with water,’ this seems awfully light- especially if the youngest bourbon is 6 years old from #4 char barrels.  Odd.

It’s easy to pick out the scents here, as caramel, light oak, and gingerbread dominate the palate with a heavy dose of ethanol, certainly due to the high ABV.  It has the sweetness of the recent Wild Turkey products with an ominous hint of alcohol.

This doesn’t deviate greatly from the nose except that the ethanol note is far stronger on the palate than on the nose, and that’s its undoing.  Where there are the nice Wild Turkey flavors I’ve come to love recently, the ethanol notes make me question whether or not Wild Turkey has ditched the 6-8-10 year batching scheme altogether.  Basically, this needs more time in the barrel.

Medium to long, the finish carries through light oak, caramel, clove, and cinnamon, but it all gives way to mouth-coating ethanol which almost screams “white dog.”

I’m really perplexed by this bourbon.  All the good flavors we’ve come to love from Wild Turkey are present, but it tastes so young that it seems a bit out of balance.  If it seems I’m being a bit harsh here, I am.  It’s not that this is a bad bourbon, but it’s so close to be excellent that it winds up disappointing due to that strange ethanol characteristic.  I can’t help but reiterate my questioning of the age.  While it’s not stated on the bottle, the 6-8-10 year verbage has been in communications from Wild Turkey for a while regarding Rare Breed.  It’s well within reason to think that they’ve stopped using older whiskey, given today’s climate, without notifying the public. Conversely, It may still be a mix of the same ages, but at the very least, there must be a far higher percentage of the 6 year product in this than there was just a couple years ago.  Ultimately, a trend towards younger bourbon is a reality that we have to face, but whatever makes up the base of this bottle was simply not ready to be dumped yet.  It shows in the form of a product that should have blown the doors off me, and was instead, inferior to their other lines.

In the end, I have to suggest that Wild Turkey drinkers are far better served sticking with Wild Turkey 101 to save some cash, or especially the Wild Turkey Russell’s Reserve Single Barrel Selections that check in with 10 years of age and 110 proof.  Both are superior drinkers to this Rare Breed.