Whenever I think about the rise in the number of startup distilleries over the past few years, my mind churns with not only the possibilities, but the logistics.  Consider this:  When ModernThirst launched in late 2013/early 2014, one question that inevitably was asked every time we toured a distillery involved the shortage of barrels and whether or not the distiller foresaw a bottle neck in which they could produce distillate faster than barrels could be made to age it.  Luckily, that Y2Kish panic subsided as increased capacity at cooperages quickly began churning out more and more barrels to meet demand.  And foresight by coopers over the decades  led to replantings of American white oak over the years to make sure the raw materials, while perhaps not overabundant, are at least adequate for the increase in demand as well.

But while there are some massive operations in the world of cooperage (Independent Stave, among a few others), the question on my mind has been how smaller or craft distilleries acquire barrels.  Brown-Foreman Cooperage is, obviously, only producing for Brown-Foreman.  Some of the larger cooperages work in a near-commodity setting, where the bottom line is delivering huge quantities of barrels at the least possible cost.  And that can work fine for larger producers who need vast numbers of nearly identical barrels for their product. 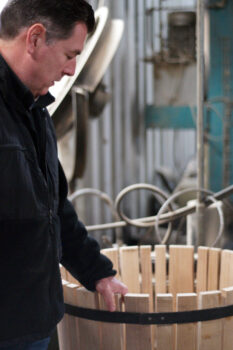 Kelvin Cooperage is a family-owned cooperage was founded in 1963 by Ed McLaughlin in Glasgow, Scotland, so they are not a fly-by-night or startup. (It is named for the River Kelvin in Glasgow).  Like most Scottish cooperages, their expertise was taking used barrels and repairing and refurbishing them for secondary (and more) usage to age Scotch.  By the 1991, the need to be closer to the source of used barrels pushed them to relocate a large percentage of businesses to the US.  By 1995, they were making barrels themselves, though only wine barrels for the first few years.  By the new millennium, they were making whiskey (and rum) barrels in the US for use in Irish whiskey and Scotch, and all their operations were in Louisville, KY.  Their volume was low enough that through the barrel shortage of 2010, they were actually able to increase production throughout the barrel shortage and provide barrels to the growing bourbon and American Whiskey industry.  Currently, they produce barrels for the likes of Kentucky Peerless, Belle Meade, Rabbit Hole, Jeptha Creed, and Angel’s Envy.  But they do more than that.

A visit to their operations on Outer Loop in Louisville, KY quickly reaffirms that.  The moment I spoke to current generation McLaughlins Kevin and Paul, I knew Kelvin’s roots were Scottish.  The accents are unmistakable.  So, too, is the difference between their business model and the larger cooperages.  For starters, the facility itself is dwarfed by the massive plants owned by Brown-Foreman and the like.  The building itself was constructed in the 1940s as a cooperage, and has always been a cooperage.  The conference room displays a number of bottles of spirits aged in barrels Kelvin Cooperage produced, and there are stories behind quite a few of them.  As a smaller cooperage, Kelvin Cooperage is able to work collaboratively with clients, tailoring their products to the client’s needs- smaller barrels, unique toasting or charring, etc.  This is far more than a commodity of X barrels in / X barrels out for the lowest possible dollar.  And they haven’t forgotten their roots as traditional Scottish coopers as they also buy and refurbish used barrels for secondary uses.

The process they use to produce barrels is not altogether dissimilar from the larger cooperages, though it differs in some interesting ways.  The most noticeable is the char method.  Rather than a conveyor belt moving barrels into a tunnel where they’re shot with gas-fed flames for charring, this is a hands-on process suing scrap wood leftover from producing the staves.  The scrap wood is heated, and the burning chunks of charcoal are then shoveled into the new barrels and capped to build heat.  When the iron cap is removed, the oxygen causes the charcoals to burst into flames, charring the barrel.  All this is done by hand, not by machine.  As I wrote earlier: this is a craft cooperage.

I appreciate the visits I’ve paid to the big cooperages, but this was a new experience.  I was much closer to the production in a much smaller environment.  The craft and skill required to make a barrel are on clear display at Kelvin Cooperage. It’s a hands-on process tailored to the client’s needs. They are thus able to both custom tailor barrels in small numbers and yet still provide batches of barrels for repeatable distillations at small to medium distilleries.  It’s fascinating.

*Special thanks to Bob D’Antoni for the introduction. 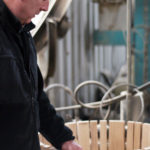 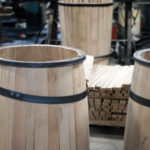 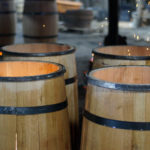 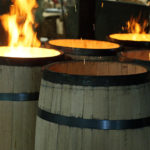 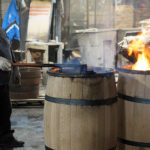 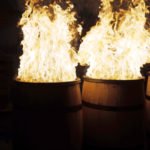 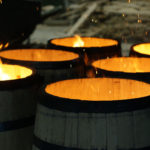 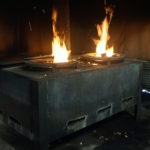 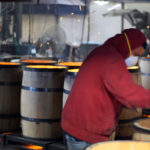 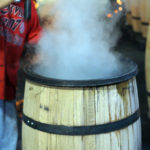 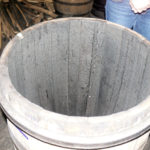 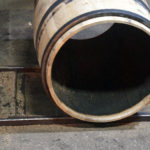 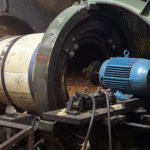 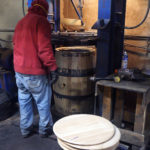 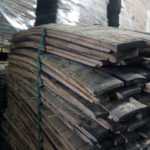 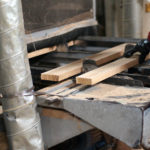 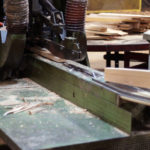 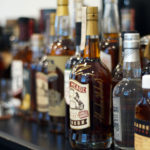 some of the labels Kelvin has supplied 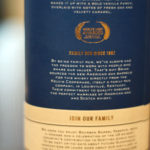 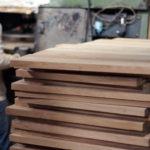 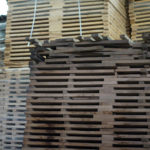 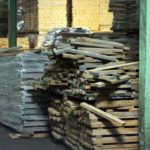 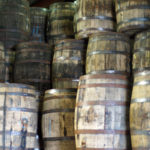 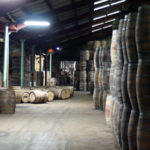 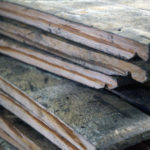 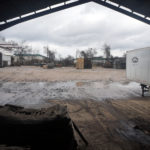 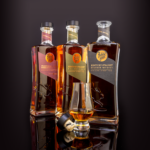