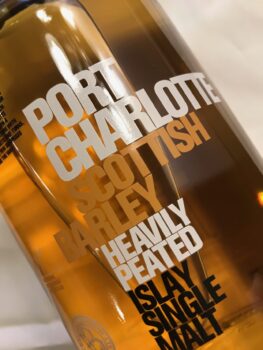 The texture is extraordinarily rich with huge depth of character. The smouldering heat of peat fires pulls you into a whirlpool of Islay flavours and aromas but with such finesse that you welcome the storm.

After describing the nose, palate, and finish – the publicity materials note the “mood” evoked by the Scottish Barley Heavily Peated release:

It cries “freedom”. You are in a good place and you envy no man.  You feel alive and ready for whatever lies ahead, knowing that the true spirit of Islay is with you.

One side note – as I sit preparing this review I have two Glencairns on my desk with pours of both the Port Charlotte Islay Barley and the Scottish Barley so I can revisit them in a quick head-to-head to confirm my thoughts from a few weeks back. 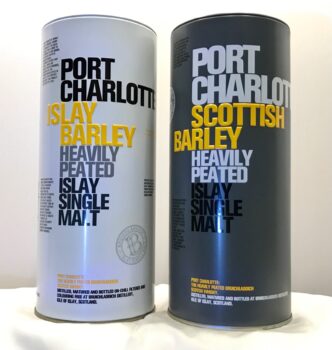 green apple, pear, a fruit tartness, less smoke than the Islay barley and not as sweet on the nose as the Islay Barley version (WJ); tart – maybe cherries, clean peat smoke, a bit of green fruit (JR)

medium, a touch of smoke ash, some tongue tingling and a slight pepper spice on the finish (WJ); a bit hotter than expected, medium-long finish (JR)

PORT CHARLOTTE ISLAY BARLEY HEAVILY PEATED:  Thoughts from Wes – a younger whisky with great potential – I would not turn away a dram, but if I were to choose I would go with the Islay Barley instead.  The side-by-side comparison between the Islay and Scottish Barley editions tonight just reconfirmed by previous thoughts – maybe even slightly increased the spread between the two in my opinion.  Final thoughts from Jeremy – a bit simple, even with the peat.  I am not sure I like this better than the unpeated version – maybe by half a point at most.

Thanks for reading another scotch review here on ModernThirst.com.  Check back here soon for a review of the Bruichladdich Islay Barley Rockside Farm Unpeated Islay Singly Malt whisky. Until then the whisky quote of the day as we close this latest installment is from Bob Dylan’s song Moonshiner:

Let me eat when I’m hungry,

Let me drink when I am dry,

A dollar when I am hard up,

Religion when I die,

The whole world’s a bottle,

And life’s but a dram,

When the bottle gets empty,

It sure ain’t worth a damn.

Disclosure: The sampled bottle of Port Charlotte Scottish Barley Heavily Peated Islay Single Malt was graciously provided by Christina, representing Remy USA.  ModernThirst.com appreciates their willingness to provide their product for review.  The contents of this review are our own, made without outside influence, or strings attached.