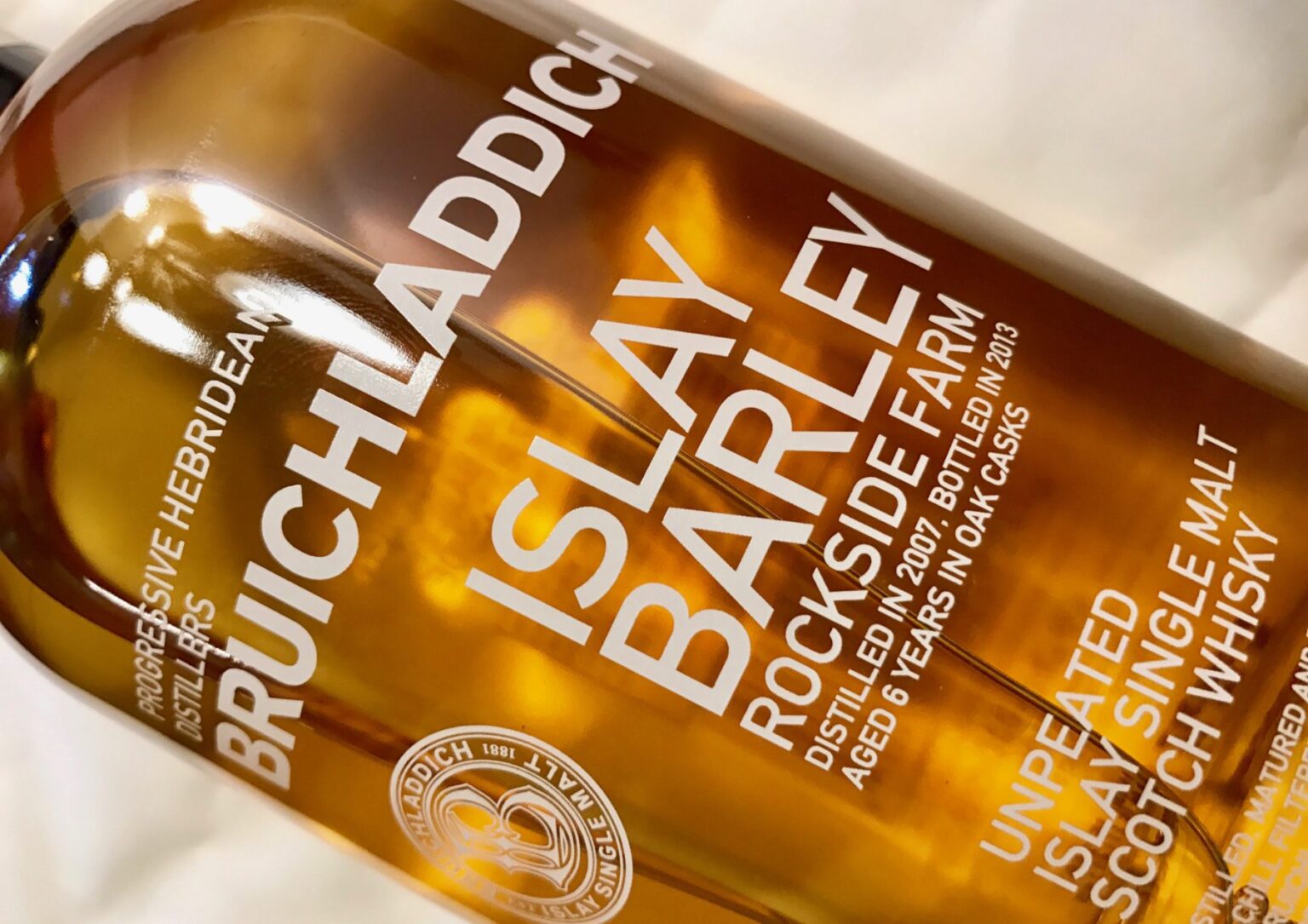 A decent unpeated Islay whisky.  Of the four Bruichladdich Distillery offerings we tasted this one squeaks out a number two ranking overall, amongst the four.  So, as a welcome home dram does it fit the bill?  Sure, but I’d rather reach for the peated version in this case. 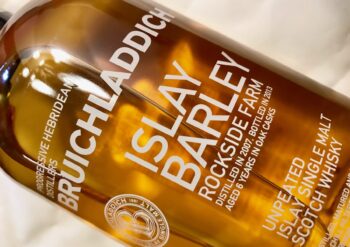 Today we are tasting an unpeated Islay Single Malt Scotch whisky from Bruichladdich – the first Islay unpeated effort that we have reviewed.  Bruichladdich notes that ten different farms on Islay grow barley for the distillery – providing a wide variety of terroir to challenge the industrialized barley farms of the Scotch industry.

Harvested in 2006 and distilled in 2007, the grain for this iconic whisky was grown for Bruichladdich in the Minister’s Field at Rockside Farm by Mark and Rohaise French.

A painfully slow distillation to gently coax the delicate oils and flavor compounds from the barley, coupled with casks carefully selected to preserve those flavours, has resulted in a whisky of exceptional complexity.

We believe terroir matters.  Distinctive, authentic and unique, this is land and dram united.

After describing the nose, palate, and finish – the publicity materials note the “mood” evoked by the Islay Barley Rockside Farm 2007 release:

It is the perfect welcome home dram at the end of a hard day.  You have given your best so you are entitled to drink the best.  Because you can.

floral sweetness, touch of vanilla, honey, a little caramel, and some citrus notes (WJ); a moss note, some pepper, more caramelized note than other unpeated Bruichladdich tasted, and a tart sourness (JR)

a malt sweetness, a touch of spice and pepper, a definite oaky note present on the palate (WJ); nice oily mouthfeel (JR)

a touch longer on the finish than the unpeated Scottish Barely, medium overall in length (WJ); medium-long, pleasant – but a bit one-note, less bitter and sweeter than the Scottish Barley release – and I prefer the sweeter note (JR)

BRUICHLADDICH ISLAY BARLEY ROCKSIDE FARM 2007:  Thoughts from Wes – does not seem to have the nuances of the Scottish Barley version when tasted side-by-side.  Taste does not quite measure up to the nose for me with this whisky.  Not a bad dram, but not one I’d necessarily seek out either.  Final thoughts from Jeremy – pretty basic whisky, but not altogether uninteresting. 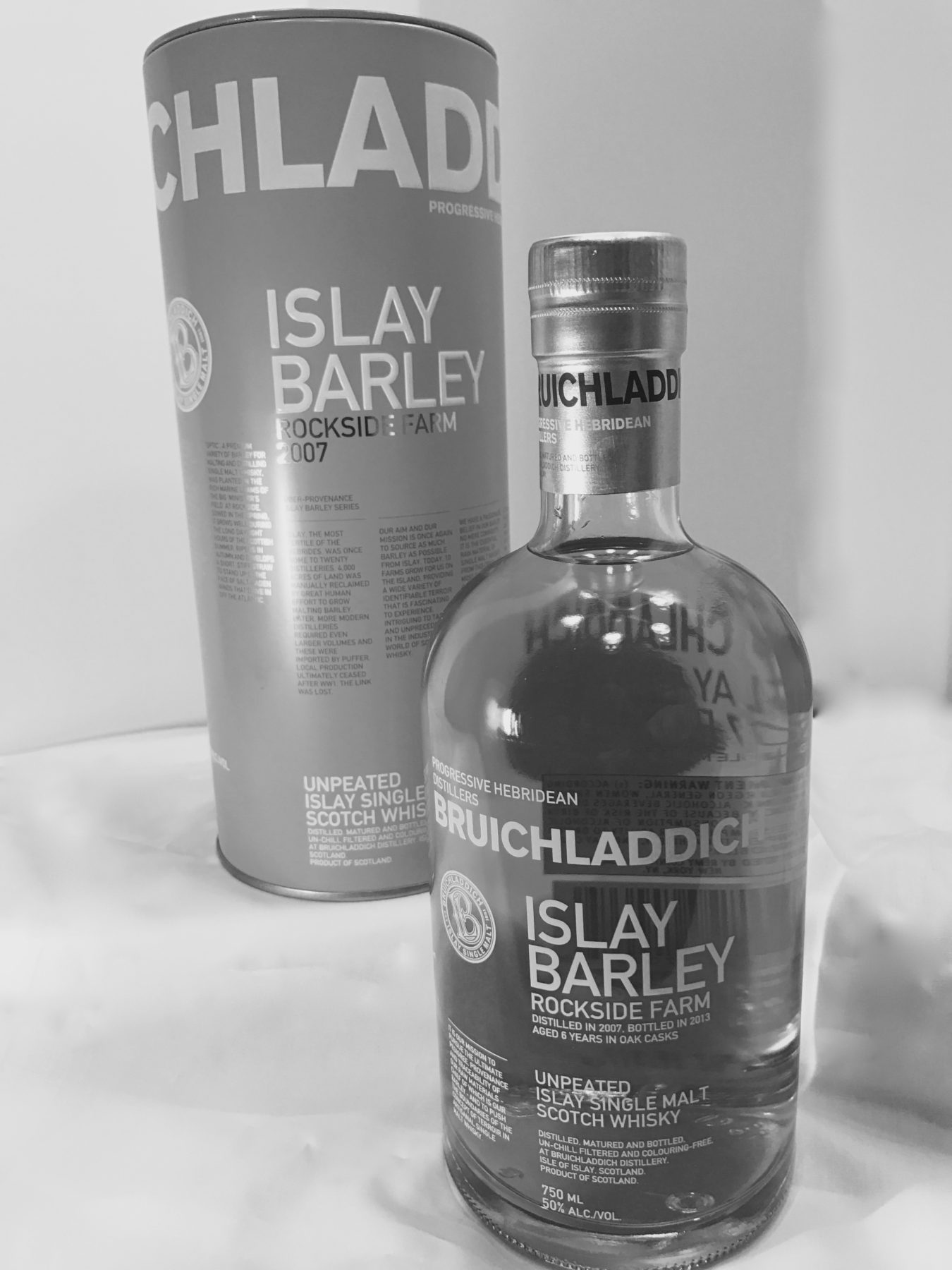 Thanks for reading another scotch review here on ModernThirst.com.  Check back here soon for the last of our four Bruichladdich Distillery reviews when we taste the Bruichladdich Scottish Barley The Classic Laddie Unpeated Islay Single Malt whisky. Until then the whisky quote of the day as we close this latest installment is a quote from the 7th president of the United States, Andrew Jackson: “I have never in my life seen a Kentuckian who didn’t have a gun, a pack of cards, and a jug of whiskey.”  And today there are more barrels of whiskey aging in Kentucky than there are residents of the state [6.8 million barrels as of 2016].  So, a barrel and a half for each Kentuckian, much better than a mere jug.

Disclosure: The sampled bottle of Bruichladdich Islay Barley Rockside Farm 2007 Unpeated Islay Single Malt was graciously provided by Christina, representing Remy USA.  ModernThirst.com appreciates their willingness to provide their product for review.  The contents of this review are our own, made without outside influence, or strings attached.