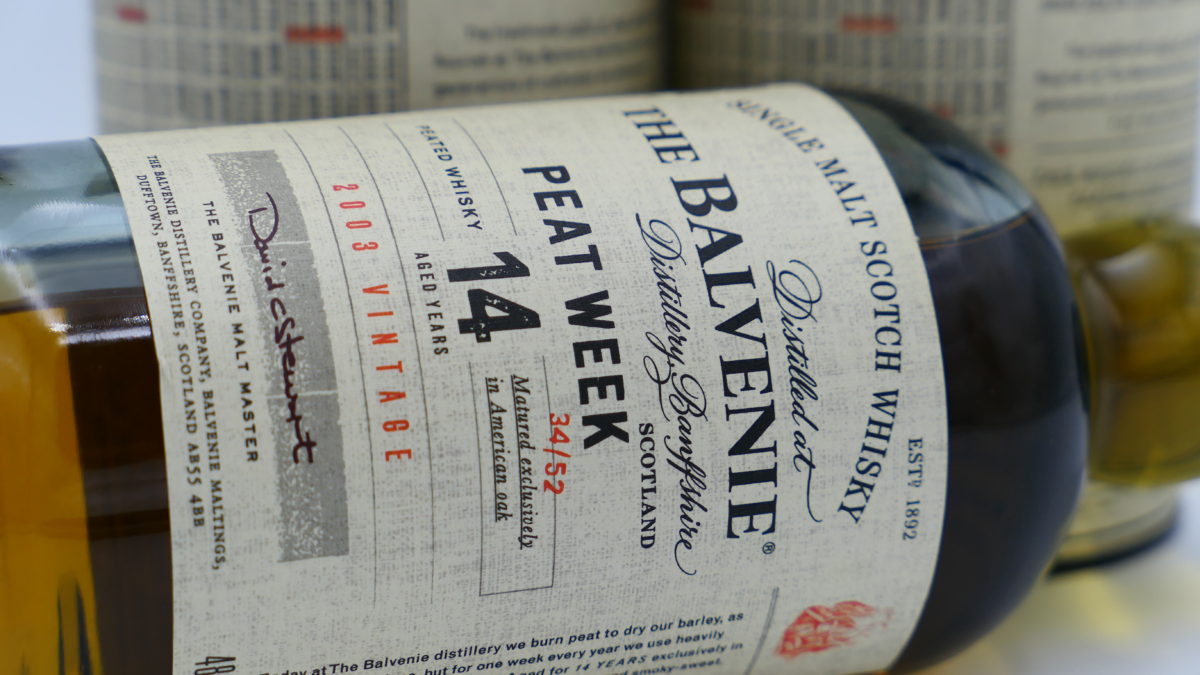 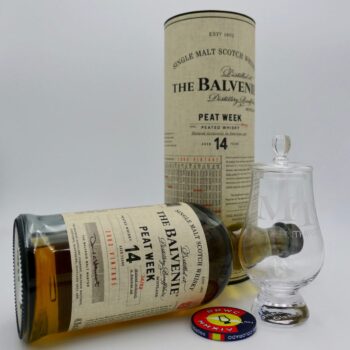 As I sit writing up the two Peat Week reviews (2002 and 2003 Vintage) I’m listening to my favorite artist of all time Bob Dylan – specifically, various versions (eleven to be exact) of All Along the Watchtower. And I feel that is a fitting tune for these drams. So, with the lines “businessmen, they drink my wine – plowmen dig my earth – none of them along the line – know what any of it is worth” echoing in the background let’s jump into this review and see how the 2003 Vintage stacks up against the 2002 Vintage from our last review.

For a little background on this bottling from The Balvenie Distillery (same as last time but repeated again here):

The Balvenie Peat Week Aged 14 Years (2003 Vintage) is the result of trials undertaken in 2001 by The Balvenie Malt Master David C. Stewart MBE and our former distillery manager Ian Millar.

At a time when few Speyside distilleries were using peat in production, The Balvenie decided to distil a batch of heavily peated malt, which was laid down to mature at the distillery in Dufftown, Scotland.

Ever since then we’ve dedicated one week each year, named Peat Week, to using 100% Highland peat to dry our barley. Instead of coastal elements of iodine, salt and medicinal characteristics so commonly associated with Islay peat, Highland peat imparts earthy, woody smoke notes. This means that even though Peat Week is made using heavily peated malt (30ppm) it has an unexpected sweetness deeply rooted in the Speyside regional character.

more in the Islay realm than the 2017 (2002 Vintage), the smokiness is more pronounced with vanilla breaking through, some honey underneath (WJ); much more Islay-ish than last year’s release, vanilla, apple, pear, touch of chalk, a smoky crème brulee (JR)

nice dram, tingly smoke with malted sweetness, honey, caramel just before it has been heated too long (WJ); honey, some spice, apple, citrus, medicinal and a touch of ash at the end (JR)

medium-long, the smoke lingers longer than the 2017 (2002 Vintage), charred sweetness (WJ); smooth, satisfying medium-long, smoke through and through, but not overpowering (JR)

Earlier I noted that I was listening to Dylan’s All Along the Watchtower while writing these reviews.  Now a few days later, as I put the finishing touches on them, I sit in a hotel in New Mexico awaiting Bob Dylan’s show in Albuquerque tomorrow night – it will be my tenth show and I cannot wait.  In the most recent shows he hasn’t played All Along the Watchtower and if he doesn’t that will be fine, just being in the presence of Bob is like experiencing a fine whisky, it is something you never forget . . . Cheers.

A winner and one of our favorite Balvenies. I’ll look for this release each year. In Dylan’s, All Along the Watchtower, he sings “and the wind began to howl” – this whisky would provide comfort in the midst of the storm.