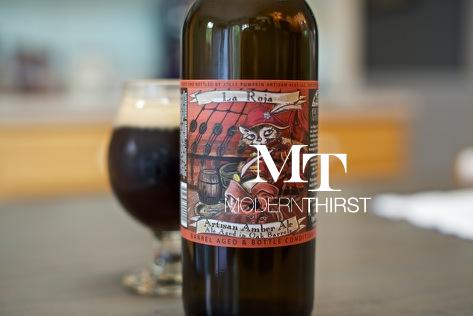 You tell almost anyone that you’re excited to drink a beer that is two years past its “bottled on” date and they will look at you like you’re crazy and probably make some kind of disgusted face.  But if that beer is Jolly Pumpkin La Roja, a sour amber ale aged in oak barrels, then the age is totally justified since sour ales can age like fine wines as time in the bottle allows the souring bacteria to do its job and add complex flavors to the beer.

This particular two year old bottle of La Roja had been kept cool most of its life, and upon popping the cap it is apparent the carbonation has not faded a single bit.  A lazy pour yields a creamy, off-white to light tan, one finger head.  The murky mahogany beer lets little light through the glass.  It’s not so dark, however, to hide the tiny bubbles of carbonation floating up the side of the glass.

The nose is exactly what one would expect from a sour amber.  It is heavy on sour overripe apples (in the absolute best way possible).  There is also an earthiness that could be from the oak barrel aging.

With the first sip the palate is met with a sour fruit character; the most noticeable for me being sour apples and tart cherries.  In the middle the malts make a brief and subtle appearance before the presence of Brettanomyces helps to give the beer a mild acidity and a tart yet earthy finish.

Overall the balance of sour fruits, a hint of malt sweetness, and tart acidity make this a very drinkable sour beer.  If someone was leery of trying sours or had tried sours previously and was turned off to them, I would suggest they share this beer with a friend.  Jolly Pumpkin La Roja would make an excellent entry sour beer for someone looking to try them.  It’s relatively easy to find and isn’t priced as high as many other sour beers out there.