Though Modern Thirst was unable to attend Monday’s meeting of the Greater Cincy Bourbon Society, the Chad Finni of the Soceity was kind enough to send us a recap along with some photos of the event!  Looks like it was a great time!

Bill Withlow, from Wiseguy Longue, along with fellow co-worker Kevin, joined us in a summer cocktail lesson. Bill was pictured in the most recent issue of the Bourbon Review for being amongst the top 60 bourbon bars in the United States. The two arrived early to start preparing all of the drinks to serve to the attendees of the event that evening.

The first drink that Bill put together was the Seelbach, named after the hotel in Louisville with a rich history. Bill worked there for a period of time and crafted the drink after the recipe he used when working there, always using a zest of orange. His choice bourbon for this particular cocktail was Old Forester 86. He put the drink together as he explained the history of the hotel and the drink itself, talking about how the acoustics in the building would allow for people to hear conversations from the opposite side of the room. 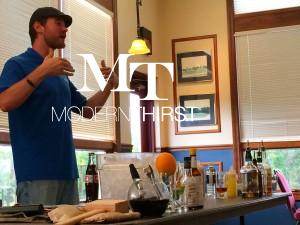 The second cocktail was a hand crafted Mint Julep, made with Woodford Reserve. This one turned a lot of heads. There were first grumbles floating around the room about this particular drink, to the point where you could almost sense a lack of excitement for this one, but Bill and Kevin turned the crowd around with this drink. Their methods of preparation for this drink differ from others. They used techniques to release some of the mint without it being over powering. Instead of crushing the mint, they simply pressed it and slapped the sprig to release the aroma from the mint. The initial grumbles quickly turned positive after tasting the julep they had just been handed. 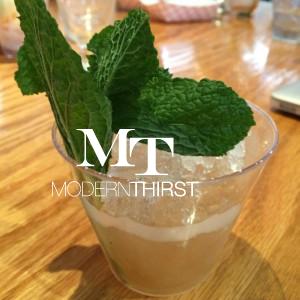 The final cocktail of the evening was the Bourbon Sour, made using Wild Turkey 101, and yes, an egg white. For some in the room, this was their first try of a bourbon sour made with egg whites. Bill and Kevin did a great job of demonstrating what made this a great drink, as they were making them for the group right and handing them out as they were prepared. 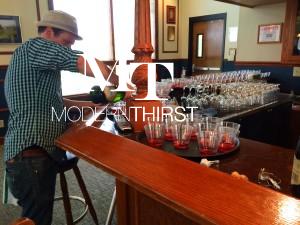 As the evening progressed, it became obvious that the atmosphere was relaxed. Most of the folks talked about what they generally drink, and how these cocktails differ from a “normal” night for them. There were plenty of questions by the end, and a lot of conversation going around the room amongst the attendees. Overall, it was another great event for The Bourbon Society of Greater Cincinnati.