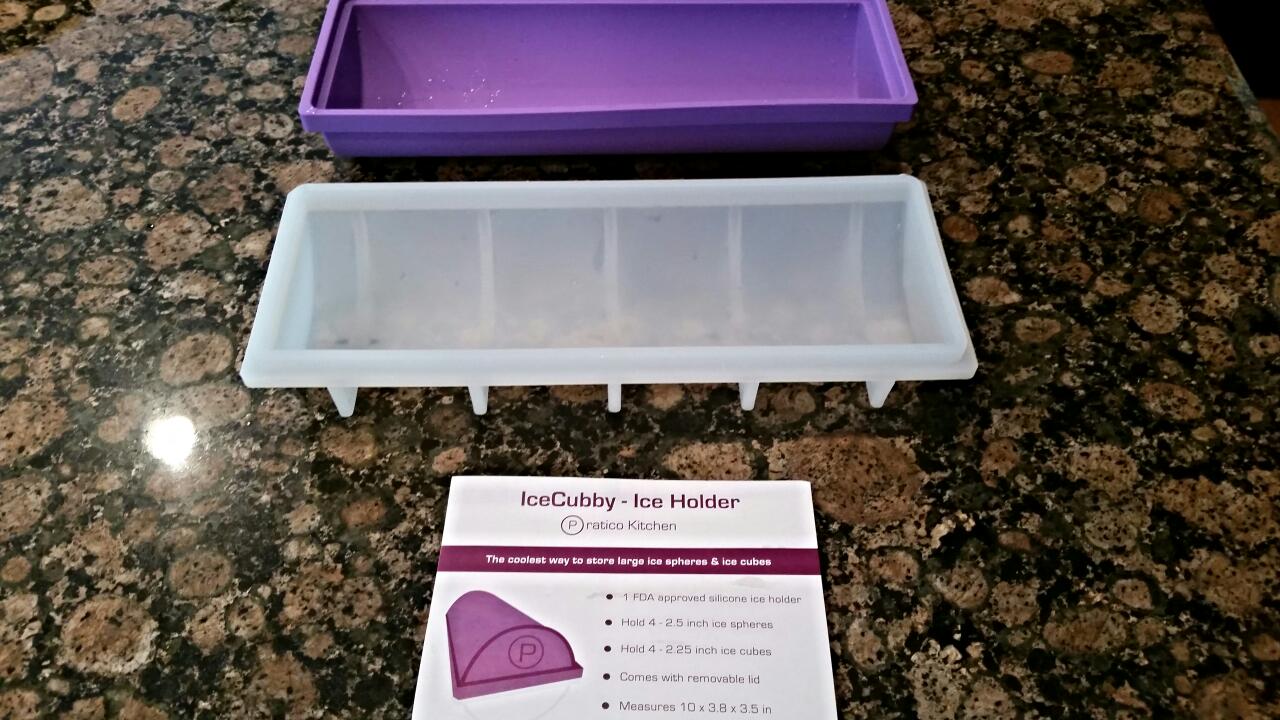 In terms of barware, no question is posed to us here at ModernThirst more than those regarding our opinions on whiskey stones, ice spheres, and ice cubes.  So it fits in nicely that we were approached about trying out a couple of products from Practico Kitchen, including the PractiCube ice tray and the IceCubby Ice Sphere storage tray.

We were sent test units of each and we promised to give our unbiased opinion.

The PractiCube is essentially a silicone tray that makes 4 2.5 inch ice cubes.  That’s a pretty large chunk of ice, if anyone’s measuring.  For those drinking whiskey with no mixer, it allows a larger surface area of the ice to contact the whiskey and the large mass of the ice helps keep it from melting as quickly and diluting the whiskey.  Win-win, right?

Unpacking the PractiCube revealed two soft silicone trays with dividers that clearly make four large ice cubes per tray.  I filled them with filtered water and let them sit overnight in the freezer.  Surprise surprise, there was ice there the next morning.  I know, I know, what can you really say about an ice cube tray?  The answer is not much.  In the end, it either makes a good cube or it doesn’t.  This one does.  If there is any complaint, it would be that the soft silicone is a little hard to pick up and move to teh freezer without spilling it after water is added.  But that’s offset when removing the large cubes, as the soft material makes it easy to get the whole cube out without cracking and breaking it.

A word to the wise:  these are fairly large ice cubes, so make sure you’re using a large enough rocks glass to accommodate them.  If you find they’re slightly too large, just fill them with slightly less water and the cubes will be a bit smaller.

The IceCubby is interesting.  It’s actually a product I’ve sort of wanted, but didn’t know I wanted.  I have two ice sphere molds, which work great, but have a certain limitation:  I often need more than two ice spheres.  In the past, I’ve usually removed them from the sphere and placed them in freezer bags for storage while adding more water to create a couple more spheres.  I’ve debated chucking them into the ice bin in the freezer before, but they wind up fusing to other cubes, and picking up that nasty accumulation of freezer ice on them when that happens.

Enter the IceCubby.  Like the PractiCube, it’s made of soft silicone.  It is, basically, a soft tray that holds up to four 2.5-inch ice spheres in your freezer.  They won’t roll around, won’t get lost, and wont get stuck to that bag of frozen peas that’s been in there for a decade.

It does the trick.  Necessary?  Absolutely not.  Kind of neat for those of use who obsess a but too much over our bourbon and how we drink it?  Sure.  It’s sort of like a drawer divider.  Sure, you can find other ways to keep your kitchen utensils separated, but here’s a simple, pre-made way to make it easy.

Again, the one complaint is the material.  While it’s good in that it keeps the ice sphere from freezing to it, the soft, flexible silicone also makes it hard to move around.  Really, once you get it where you need it in the freezer, the best bet is to just leave it there.  But, again, that’s a bit minor.  Either way, it works.

After testing, it’s safe to say we can give a positive recommendation on both products.  They do what they’re intended to do.  If you’re using cubes, you probably won’t want the IceCubby, as it’s made to store spheres.   If you use spheres exclusively, the PractiCube may be a bit redundant.  But individually, they are solid, affordable ($13.99 for the IceCubby and the same for two PractiCube trays on Amazon) gifts for the whiskey drinker who has everything.