We’ve reviewed a number of Barton 1792 products before, the most notable being a series of different barrel select and standard bottlings of  1792 Full Proof, which was among the best new offerings of 2016.  However, I’ve never been a huge fan of the standard 1792, a small batch bourbon using the standard high-rye Barton Mash Bill. It’s fine, but it has always leaned a little too one-dimensional towards black pepper, with a weak mid-palate. 1792 Single Barrel is, you guessed it, a single barrel version of 1792 Small Batch. 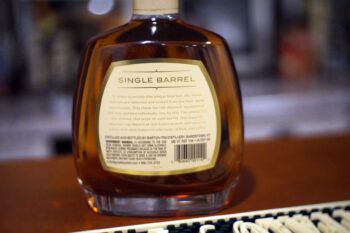 That means there should be some subtle or even not-so-subtle variations in taste from the small batch and other single barrels.  This is NOT a private pick, rather it’s the standard off-the-shelf single barrel 1792.  The barrel number, age, and warehouse are not listed- that’s a bit of a pet peeve of mine, but a minor one, and perhaps 1792 doesn’t have the logistics to make that happen.

Black pepper is the first and most prominent scent on the first pass, but there is a depth to this that is not present in the small batch.  A brown sugar and caramel note underlies that pepper note in a most pleasing way.

Right down the center of the tongue, the trademark spice of 1792 in on display, but the edges of the palate get definitive notes of caramel, vanilla, and graham cracker, balancing the black pepper spice quite well.

This is where it gets tricky.  The overpowering black pepper from the small batch bottling is still here, but it is somewhat offset in this single barrel version by a mix of oak/barrel tannins and brown sugar.

I was fully prepared to be underwhelmed by this.  To be honest, I thought the single barrel would be very similar to the small batch, and it would take a solid private barrel pick to really stand out from the solid-but-uninspiring 1792 small batch.  I was wrong.  This bottle is a nice sip, full of caramel and vanilla while maintaining the trademark high rye profile.  If I’m choosing between this and the standard 1792, I’m picking 1792 Single Barrel every time.

This single barrel offering of standard 1792 is a nice step up in sweetness and depth of flavor from the normal small batch version. It's worth a couple of extra dollars.